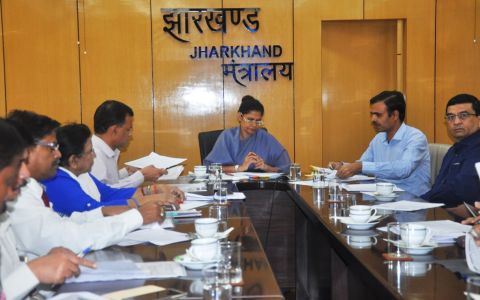 Getting connected through video conference with representatives of the state Finance,MNREGA,Social Welfare Departments,DDCs,Additional Directors Social Security and Lead District Managers,Verma directed them that the task of National Payments Corporation of India mapping and Aadhaar seeding work connected with implementation of National Social Security Pension and opening of bank accounts under Pradhan Mantri Jan Dhan Yojna(PMJDY) should be completed within ten days.

Several facts came to light during their video conference.These were:

*12 lakh accounts were opened under PMJDY) during the past one month.

*This raised the total number of bank accounts under PMJDY to 83 lakh against the target of one crore in Jharkhand.

*Directive was issued to make MNREGA and Social Security pension scheme with PMJDY to 100 percent in the next ten days.