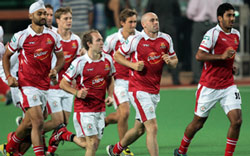 Dabur Mumbai Magicians face a do-or-die battle when they take on Jaypee Punjab Warriors in their fifth encounter of the Hero Hockey India League (HIL) at the Surjit Singh stadium here on Thursday.

The Ric Charlesworth coached side has failed to win any of their four league encounters and the Magicians need inspiration from whichever quarter they can, to turn around their fortune in the inaugural edition of the cash-rich league.

The team has taken time to settle down and oppositions have exploited their defensive frailties in the later stages of the match. In their last encounter against Delhi Waveriders, the Magicians took a 4-3 lead only to go down 6-4 with their defence completely at loss once the opposition stepped up the pace of their attack.

The only area where the Magicians can take solace from is the return to form of penalty corner specialist Sandeep Singh. The former India skipper was in his element against the Waveriders and scored a hat-trick to partially redeem him after having missed a penalty stroke against the same opponent in their opening match of the tournament.

The Magicians had suffered a similar reversal when the Punjab Warriors came visiting to their home turf and the host’s failure to maintain their composure at the back in the last quarter had help the visitors resurrect their Hero HIL campaign with their first victory in the tournament after three straight loses.

On the other hand, the Warriors were held to a draw in their last encounter against Uttar Pradesh Wizards and they would need to regain their scoring touch in order to keep the Magicians at bay.
All in all, we can expect a high tempo encounter with both teams needing a victory to keep their semi-final hopes alive.

Before their match against Jaypee Punjab Warriors, Sandeep Singh, Captain of Dabur Mumbai Magicians, said, “We have devised some new strategies for this match and plan to implement them. The team has improved considerably from where we started off and is really pepped up to play against the Punjab team. I am confident that the team will put up a good show against the home team”.

Barry Dancer, Coach Jaypee Punjab Warriors: “The last two games have been very satisfying and I am very pleased with the improvement shown by the team after every game. We are a different side now and a tough opponent to beat in this league. We won our last game against Mumbai Magicians in Mumbai and would, therefore, have the psychological advantage over them before tomorrow’s match.