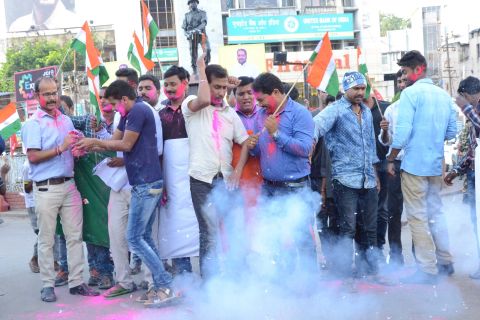 Ranchi, jharkhand 29 September 2016 :: People celebrating after India conducted Surgical Strikes across the Line of Control in Kashmir on Wednesday night, in Ranchi on Thursday. Photo-Ratan Lal

The Indian Army conducts ‘Surgical Strikes’ across the Line of Control in J&K.The people celebrating in Ranchi.

This is what happened on Thursday,hours after the Indian Army launched “Surgical Strikes’ along the LoC.Hundreds of people burnt crackers and exchanged colour powders.

“Holi and Diwali were celebrated mainly because the Pakistani  terrorists had killed many innocent people and even the Army personnel at Uri.Now,they have been  tought a lesson”,said Sudhakar Manjhi, a student,echoing the sentiments of scores of people.