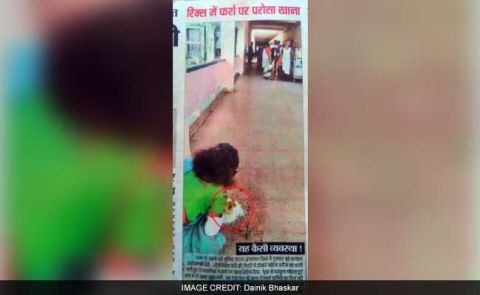 Responding to a horrific incident showing a hand fractured patient eating food put up on the floor of a state government run hospital ward in Ranchi,server was sacked and disposable plates commissioned.

The case dates back to Wednesday was video tapped by a journalist of the Hindi daily-Dainik Bhaskar at the ward of the state government run hospital RIMS whose annual outlay was over Rs 300 crore.

Though the case was not a common practice,RIMS Director BL Sherwal has ordered inquiry into it.”We are going to take action against those who forced her to eat from the floor”,said Sherwal.

It is not certain that she was a patient registered at RIMS.However,she was served food and video film made.

“I had no alternative than to beat hunger and eat rice, dal and vegetables from the floor”,she said whose arm was fractured and as such she was getting diagnosed there.

Devi who lacked a plate said she had asked for it.”But the server of the food did not provide it and put the food on the floor”,she said.

Inquiry into the incident is on.”We are shocked.Trying to figure out who brought her to RIMS.Why they disappeared leaving her without any thing,any money,any assistance eventhough she had a fractured hand.How her hand was fractured,why she was served food on floor and how a video film was made”,said Jharkhand Additional Chief Secretary K Vidyasagar.