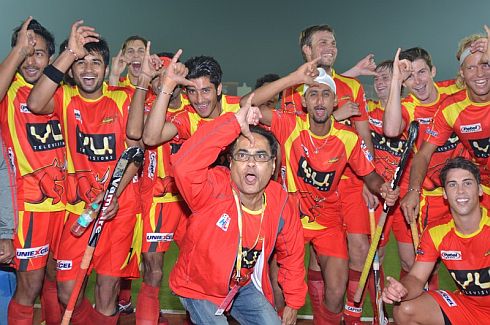 Ranchi Rhinos handed Uttar Pradesh Wizards their first defeat of the inaugural Hero Hockey India League when they got the better of the visitors 3-1 at the Astroturf Hockey stadium here on Thursday.

Strikes from Skipper Moritz Fuerste (27th minute) and Nick Wilson (67th) and a penalty stroke by Ashley Jackson (69th) proved enough for the hosts to collect five points, while Luke Doerner (53rd minute) scored the consolation goal for the visitors.

Despite the two goal margin of victory, Rhinos’ coach Gregg Clark would not be happy with the fact that the match was alive till the 67thminute because of their strikers suspect shooting and would be indebted to goalkeeper Francisco Cortes to keep them in the hunt till then.

But captain Fuerste down played the shooting problems and said, “We are very happy to come back after yesterday’s loss and win this game.”

Earlier, egged on by a vociferous crowd, the Rhinos were the first to get off the block and raided the opposition citadel at regular intervals but their forward lines inability to keep their composure in the striking circle meant that the Wizards custodian was never under any real threat.

The Wizards were content to sit back during the initial exchanges but slowly but surely began stepping on the accelerator and created the best chance of the first quarter in the eighth minute when Nithin Thimmaiah cut in from the right but Tushar Khandker’s hit could only find the leg of a defender.

Rhinos custodian Cortes deflected the ensuing penalty corner on the cross bar and had to again come up with a diving save to his right three minutes later to keep V R Raghunath’s drag flick at bay.

The Rhinos continued to ask questions of the Wizards defence in the second quarter but needed a lucky break in the 27th minute to take the lead. Birendra Lakra sent in a hopeful hit towards the Wizards goal from the 25-yard line and skipper Moritz Fuerste managed to get the faintest of touch to send the crowd in rapture.

However, the hosts continued to waste chances, including six penalty corners in the first three quarters and the Wizards finally made them pay for the profligacy when Luke Doerner converted the team’s fourth penalty corner in the dying minutes of the third quarter.

Both the teams were guilty of not showing the precision required to score the goals inside the striking circle till Nick Wilson beat the Wizards’ custodian with a reverse hit from the left, three minutes from the final hooter.

Ashley Jackson then converted the penalty stroke in the last minute to complete the score line.

Roelant Oltmans, Coach UP Wizards, said, “The spectators in Ranchi are fantastic and this is the best crowd we have ever seen. I guess the support made all the difference today. We plan to leave behind this loss we faced in Ranchi and move on with the tournament in a positive manner.”

Gregg Clark, Coach Ranchi Rhinos, said, “Our game today was good but in comparison with yesterday’s game we scored lesser goals. But we did capitalize on as many opportunities we got except of course for the PC’s we missed. Birendra Lakra played exceptionally well today”.

The Hero Hockey India League is organised by Hockey India with official sanction from the International Hockey Federation (FIH). The inaugural season is being played from January 14 to February 10, 2013 in a home-and-away format. The five franchisee-based teams, consisting of the top hockey players from India and around the world, will compete for the prestigious trophy. Hero Motocorp Ltd. is the Title Sponsor of the league while Airtel is the Associate Sponsor. Star Sports, who is the Broadcast Partner, will be telecasting all matches live.
Hero Goal of the Day: Nick Wilson