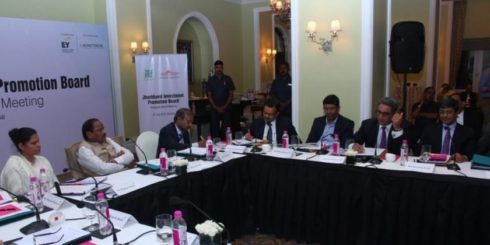 The government of Jharkhand today held its seminal investment promotion road show in association with the Confederation of Indian Industry (CII) in the city, under the banner “Momentum Jharkhand Global Investors’ Summit 2017”.

It was the campaign’s second phase with Mumbai following the maiden meeting of the Jharkhand Investment Promotion Board in July this year.

JIPB is a special body for planning and executing strategies to enhance Jharkhand’s position as a global business centre.

Though no perceptible change was visible in the infrastructure sector as potholed roads and power cuts continue to harm industrialists,Jharkhand Chief Minister Raghubar Das,during his his address, said, “While Mumbai, the Gateway to India, Jharkhand is fast emerging as the gateway to Make In India.”

During the launch of the event,six new policies aimed at diversifying state’s industrial landscape launched.More,several MoUs catering to sectors such as multispecialty healthcare and medical education, skills development and technical education, textiles, tourism, and e-governance signed.

In addition,preparations for first international road show in the USA have concluded.At the same time,sector specific investor awareness workshops conducted in collaboration with industry.

Though the result of the MoU signed can not be predicted,a number of MoUs signed in the past 16 years are leaking dust in the state secretariat.

Even the fate of Arecelor Mittal’s 12-million tonne,$6.5 billion steel project in Jharkhand appears to be hanging in the balance.