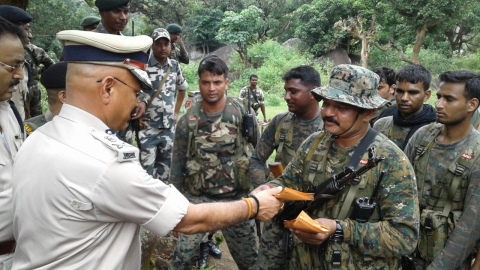 It was a grand day for the police in Maoist infested Gumla in Jharkhand.

Though the state government offices were closed on the occasion of the Adivasis’ annual festival-Karma,Director General of Police (DGP) D K Panday was on duty.

Pandey handed over a prize to security personnel for killing a veteral Maoists who were identified as a Member of the banned CPI(Maoist) outfit Special Area Committee.He was Ashish Da or Ashish Yadav who carried a reward of Rs 25 Lakhs on his head.

Da was recently killed in an “encounter’ between the Maoists and security forces in the forest of Podadih in Gumla.