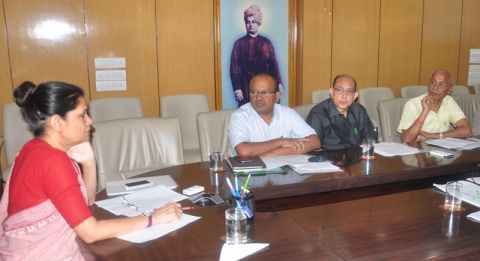 Jharkhand Chief Secretary Raj Bala Verma on Friday reviewed the state Information Technology Department and directed it to expedite the process to connect all Panchayat villages with Internet so that the government’s welfare schemes can be made accessible to people at ground zero.

“Complete pending works to take forward Bharat Net project.It is necessary to connect all Panchayat villages with Internet  “,directed the CS while reviewing the issue of e-governance inside Project Bhawan in Ranchi on Friday.

During the meeting it came to light that Internet and Wi -Fi services were available in 1266 and 404 villages respectively.In these 404 Panchayat villages with Internet connectivity,High Bandwith Connectivity has to be made available.

The CS directed Department officers to prepare DPR on Net Connectivity by carrying out a survey.

Most importantly,it came to light that Smart Class will be introduced in 4400 schools run by the state government.Toward this end,Innovation Lab will be run in league with IIM Ahmedabad at Ratu in Ranchi district.