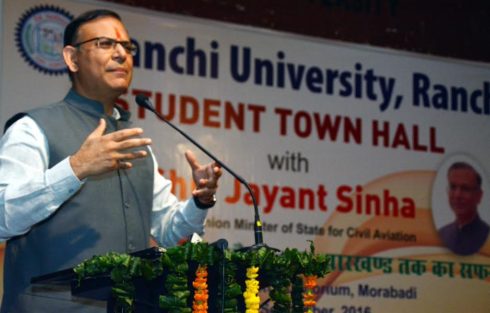 This Student Town Hall meeting took place inside its Aryabhatta auditorium in Morahabadi Maidan,Ranchi.It was addressed by Union Minister of State for Civil Aviation Jayant Sinha.

As it is,a town hall meeting is an informal arena where students can voice their opinions on issues that affect them at large.

At Student Town Hall meeting addressed by Sinha everybody was welcomed.However,people who participated in it were mainly the ones who often express their concerns and vocalize objections.

“The primary purpose of this meetin was to get feedback, whether positive or negative, from concerned citizens about the performance of the BJP led government at the Centre and the state”,said a RU Lecturer.