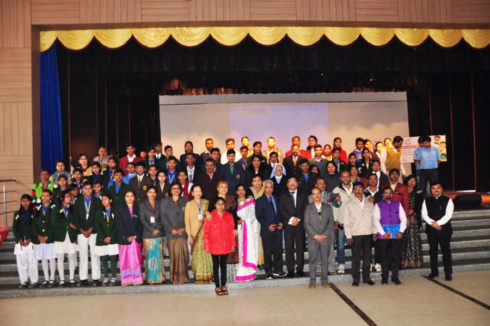 Students of all schools were busy celebrating Teachers Day with a sense of enthusiasm and festivity.The scene was no different in Jharkhand where school complexces were gripped with fervour as students put their best foot forward to pay tributes to the great visionary Sarvapalli Radhakrishnan.

From colleges to schools, every campus was abuzz with activities in Ranchi.

Students organised series of events at Loyola School, St Mary’s,DPS,Ranchi,DAV Shyamali and even in the state run schools.The teachers were felicitated and cultural programmes organised inside the school complexes.

The school management also felicitated the senior teacher’s for their contribution in the field of education.

“The celebration is to bring oneness among teachers and encourage them to perform well for the betterment of society. A teacher is one who shapes the destiny of the student,” said Barkat Singh,a teacher.

She lauded the contribution of teachers in the over-all development of country. Highlighting on the achievements of Sarvepalli Radhakrishnan he said that he was a true role model and India’s most influential scholar. Teachers should follow his path and be a guiding light to children, he added.

A scintillating cultural programme was presented by students from all DAV Schools and Inter College. The rich cultural heritage of the state and the country were depicted through dance drama titled Dances of India, which included dance forms.