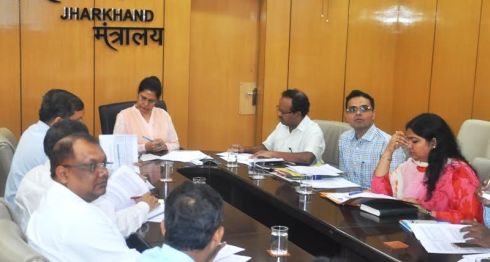 Picture shows Jharkhand CS holding a meeting with officials of the Jharkhand Livelihood Promotion Society on â€˜SHG creation and promotionâ€™ inside Project Bhawan in Ranchi on August 30,2016

The CS,who was holding a meeting with officials of the Jharkhand Livelihood Promotion Society on ‘SHG creation and promotion’ inside Project Bhawan in Ranchi on Tuesday,said that works related with making of agriculture equipments,goat/fish/chicken,sanitary napkins,etc should be done by SHGs.

In fact,the state government had taken a policy decision to set up Self-Help Groups as a major poverty alleviation initiative with a view to ensure a robust economic growth that would be labour intensive and equitable combined with development of the social sectors specially directed towards the poor.

In the meeting,it was resolved that the convergence schemes will be implemented by SHGs.It came to light that 37,000 SHGs were set up in the state.These SHGs will get fund to carry forward schemes connected with poultry-goat/chicken,agriculture equipment and drip irrigation.

A plan was also afoot to get sanitary napkins in five Divisions of the state.More,while there is a plan to connect SHGs with collection of milk,village organisations were to construct three lakh toilets in the state.