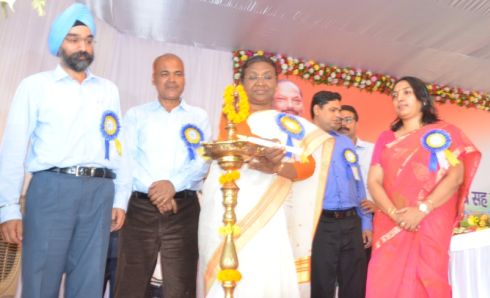 A good news for persons with disability is the Department of Social Welfare, Women and Child Development’s Disability Commissioner organised a positive programme for them.

Billed as ‘Mobile-Court’,the progamme aimed to popularise the government schemes meant for persons with disability in Jharkhand.It was inaugurated by Jharkhand Governor Draupadi Murmu in Ranchi on August 27,2016.

During her speech,Governor Murmu appreciated the organiser and observed that persons with disability don’t lack capability and competence.Talking about Stephen Hawking,she said that though he suffered from Motor Neuron Disease,he made science available to every one as he had the passion for science and the sky.

“Doctors had predicted that he will live for few years.But he was not less mentatlly able at 73 years”,said the Governor.

The Governor Murmu said that The persons with Disability Act 1995 has been operational since 1996.

“It is like a gift to the country’s three persent population comprising persons with disability.Nearly 75 percent disabled persons belonged to rural areas.The prominent factors responsible for disability were industrial pollution and polluted water of ponds in rural areas.Also,the need was to free people from malnutrition”,she observed.

The Mobile-Court programme was the brain child of Disability Commissioner MS Bhatia who too spoke on the occasion.It was attended among others by Bhatia and the state Personnel Secretary Nidhi Khare.