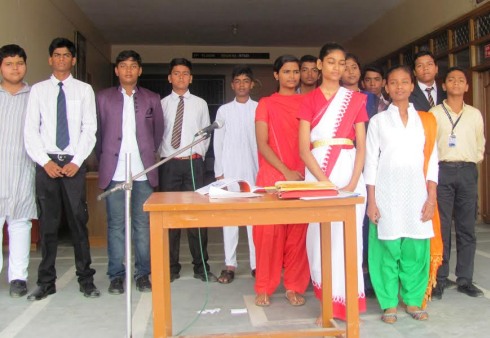 As per the directive of the CBSE,students of Oxford school in Ranchi participated in the ’70 Saal Azadi-Zara Yaad Karo Kurbani(70 years of independence:Do recall the scrifices) on Tuesday.

All students of this Oxford school sang the national anthem with a sense of pride and nationalism visible on their bodies and acts.

As it is,the CBSE’s directive was honoured by many schools in Jharkhand.The Oxford school in Ranchi is one school among them.

Earlier,the Union Human Resourse Department had intervened and mobilised the CBSE.In fact,Prime Minister Narendra Modi had on August 2,launched the fortnight long campaign ’70 Saal Azadi-Zara Yaad Karo Kurbani.Its aim was to develop a feeling of nationalism and generate awareness among the youths about the works done by freedom fighters.

Following the Modi government’s initiative,the Oxford school management deemed it fit to hold the national anthem programme on Tuesday.Its students participated with a sense of pride,said a school teacher.