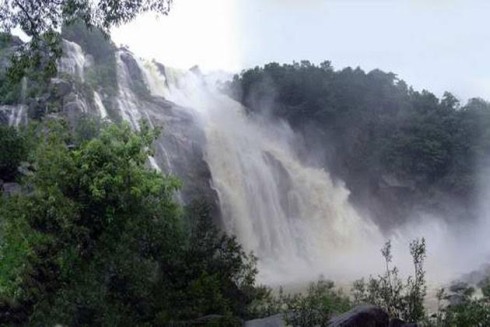 Representational Picture shows that the continued rains have left Hundru Water fall with full of water.

With the low pressure over Bangladesh and adjoining West Bengal,Southwest Monsoon continues to cause rains over Jharkhand and Bihar.

The weather system has left these states in low pressure area,though it was moving in a westerly direction.In the next 24 hours,Jharkhand is expected to get mild to heavy rains.

While Ranchi gained around 22.4 mm of rain,its low lying areas were flooded with water.Even the roads and drains were packed with water paralyzing the traffic and causing untold miseries to people.

”The drains were packed not because of rain,but because their surface moved upwards making the water get flowing over the road.This paralysed traffic and caused terrible problem to us”,said Ratan Murmu,a resident of Hindpiri.

The scene was no so in Jamshedpur where though a whopping 82 mm of rainfall was recorded,none of its drains were releasing water over the road.The scene was almost the same elsewhere.For instance,if Bokaro received 38.4 mm, Deogarh 26.6 mm.

The National Disaster Response Force (NDRF) teams are already at work over the state. Further rains over Jharkhand could make matters worse. In any case,Jharkhand is expected to receive heavy to very heavy Monsoon showers during next 24 hours.