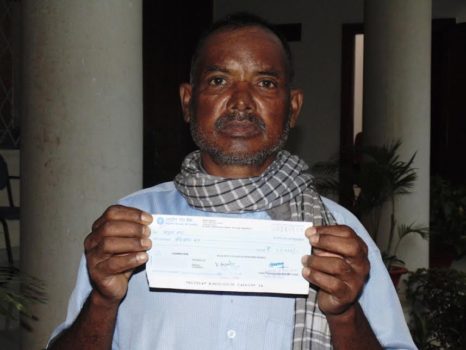 Picture shows Fagua Nag with a cheque of Rs 20,000 handed over to him by Jharkhand CM Raghubar Das on Wednesday.

Jharkhand Chief Minister Raghubar Das on Wednesday handed over a cheque of Rs 20000 to Fagua Nag,a patient of cancer.

Nag,a resident of Ulihatu,home village of Jharkhand’s tribal hero Birsa Munda,has been suffering from cancer for quite some time.On August 13,2016,when Union Home Minister Rajnath Singh and Das had visited Ulihatu,Nag had met them.In response,Das had promised to help him.

Keeping his promise,the CM handed over a cheque of Rs 20,000 to him inside the Project Bhawan in Ranchi on Wednesday.