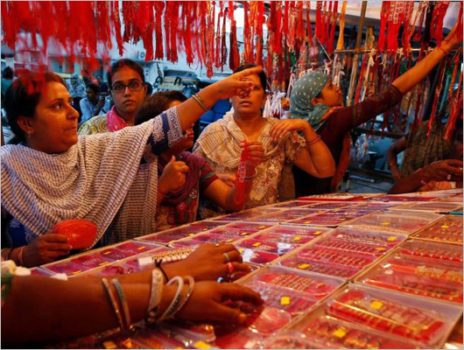 Two days before the Raksha Bandhan,the markets are brimming with customers purchasing various items to make the annual festival special.

Over the years,the festival has become secular as it is celebrated by people belonging to Jains as well.And as such,with the arrivan of the festival,the demand of Rakhi shoots up.The scene is no different this year.

One noticiable change is visible in the market places where hand made designer Rakhis are learnt to be in high demand.

Across the markets in Ranchi,the customers were lined up to pirchase these designer Rakhis.Almost all the departmental stores, jewellery showrooms, garments shops and other fancy stuff outlets have put up sales with discounts running up to 20-50 per cent.
Women,easpecially young girls, were spotted making a beeline at various gift shops to purchase the sacred thread coming in many colours and designs.
Taking the simplicity out, the festival has gone a wee bit fashionable. Earlier, a plain, simple, red-coloured thread was enough to symbolise a brother’s pledge on Raksha Bandhan to protect his sister, But today, it’s the exclusive fancy rakhis have replaced the humble thread.
Rakhis ranging from as low as Rs 2 to Rs 2,000 were available in the market, whereas special rakhi shops were also set-up in various markets.

With most girls opting for small and decent rakhis, the trend of silver and gold rakhis has also picked up. Several jewellery shops are even making gold rakhis worth thousand of rupees.