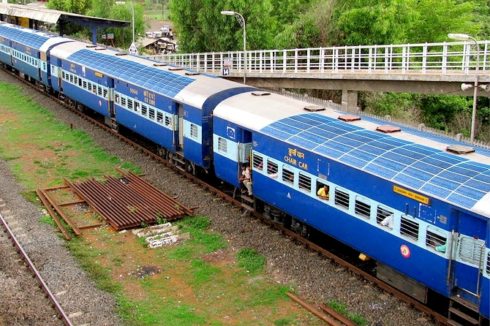 Indian Railways has started use of bio-diesel (5% blending with diesel) as an alternative to High Speed Diesel (HSD) for traction purposes since July 2015 on trial basis. It also proposes to harness 1000 MW solar power by putting up solar plants on Railway Building Stations and through land based solar plants across the country. Rajen Gohain, minister of state for Railways stated in Rajya Sabha on August 5, 2016 in reply to the question raised by member of Rajya Sabha Parimal Nathwani.

The minister stated that no special fund allotment for bio-diesel is contemplated since it is a part of fuel cost for which provision is already available in the budget. Further, in order to reduce dependence on fossil fuels, IR proposes to harness 1000 Mega Watt (MW) solar power by putting up solar plants on Railway buildings/stations & through land based solar plants across the country with subsidy/viability gap funding support of Ministry of Non-Renewable Energy in the next few years, he said.

Nathwani wanted to know whether Railways have any proposal for utilization of non-conventional energy sources as an alternative to diesel and electric power and the total funds likely to be allocated in this regard.

It is planned that as part of this, solar plants will be put up on roof top of Railway buildings through developers with Power Purchase Agreement (PPA) by Railways and partly on land based systems. For rooftop plants, tenders for 50 MW Solar

Photovoltaic units have been floated, said the statement.

Indian Railways also propose to harness about 150 MW wind energy, by itself or through Railway Energy Management Company Limited (REMCL). A total of about 50 MW renewable energy capacity has been installed till date, including approximately 13 MW solar and 37 MW wind plants, said the minister.

In reply to another question by Nathwani, the minister of state for Railways stated that it is Railway’s endeavor to provide portable drinking water at all stations. Instructions exit for periodical check on quality of water and corrective actions to be taken, if any deficiency is found, stated the Minister.