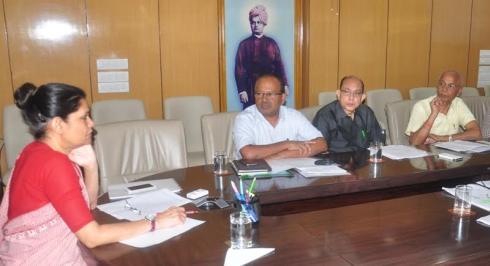 In a review meeting with officials of the state rural development department inside Project Bhawan in Ranchi on Thursday,Jharkhand Chief Secretary Raj Bala Verma directed its officials to develop ‘Social Change Agent’ as ‘Special Social Group'(SSG).

Addressing Deputy Development Commissioners(DDCs) through video conferencing,the CS told them to launch awareness campaign to prevent death in the ‘Dobhas’ built in villages by the state government for irrigation purposes in Jharkhand.

Inorder to monitor construction of rural roads,set up a ‘war room’ to review the works on a daily basis.She also advised them to map and come up with a portal to review works connected with MNREGA works at the district level.

During the meeting,it was noted that during the 14th Finance Commission,Rs 451.98 crore was sanctioned to the Panchayats and the number of registered MNREGA workers had increased from 18 lakh to 27.30 lakh in Jharkhand.

Among senior officials who attended the meeting included the Department Principal Secretary NN Sinha.The meeting also noted that 27 Rojgar Sevak were expelled and 521 Rojgar Sevaks were served with show causes