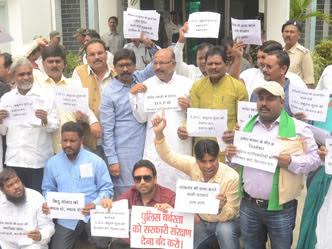 A week long monsoon session of the Jharkhand Assembly remains in grip of protest launched by the Opposition against the ruling BJP government led by Chief Minister Raghubar Das.

The session is slated to conclude on July 29,2016.Though the protest had began on the first day on July 22,it continued on the third consecutive day.

So, on Wednesday the Assembly recorded disruptions put up by the Opposition comprising JMM,Congress,JD(U) and Jharkhand Vikas Morcha over the controversial domicile policy, the ordinance to amend two land acts and so on.

Speaker Dinesh Oraon had called an all-party meeting at 10.30 am on July 27 to resolve the stalemate.Result?The opposition MLAS brought four adjournment motions on issues including the ordinance sent to the President to make changes in two land acts — the Chotanagpur Tenancy Act and Santhal Pargana Tenancy Act — besides the domicile policy which has been notified by the state government.

The Opposition MLAs led by Leader of the Opposition Hemant Soren wanted to discuss the issues and postpone Question Hour.

Leader of Opposition Hemant Soren said: “We are not here just to pass the budget proposed by the government. There are many serious issues that need to be addressed. The ordinance sent to the President is a cause of concern. The domicile policy is against people of the state. We cannot be silent.”