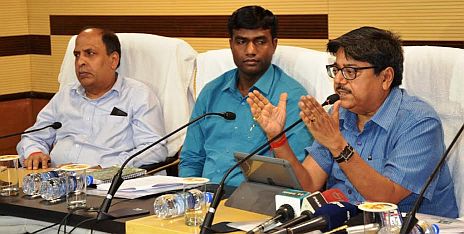 Jharkhand Additional Chief Secretary RK Srivastava on Wednesday informed that the state Energy Department has prepared a road map to supply power to consumers 24X7 by 2018-19.

During this period,the Department will develop Rs 28,000 crore worth infrastructure in fields of production and transmission in Jharkhand,he told media persons inside Suchna Bhawan in Ranchi on Wednesday.

He said that among the transmission schemes to be built during 2016-17,the tenders for setting up 12 Grid Substations at Jasidih,Giridih,Godda,Ratu,Chatra,Khunti,Saria,Jamua,Chandan Kayari,Bahragorda,Chatra and Rajmahal.were already floated.

“After these Grid Sub Stations were set up,the evacuation capacity will go upto 3484 MW”,said Additional Chief Secretary.He pointed out that in order to provide 24X7 power to consumers in the next three-four years,the plan to set up 52 Grid Sub Stations was made.

“Once these schemes were implemented,the consumers across the state will start getting electricity 24X7”,he said.