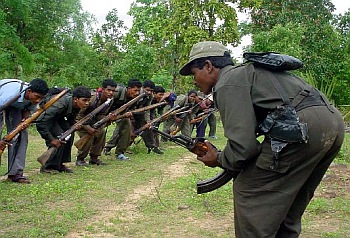 The Maoists have struck on the villagers and killed three of them on Sunday night in Tehri village under Badgard block area in Garhwa district of Jharkhand.

All three victims,who are yet to be identified,were villagers.Their bodies were sent for postmortem.But eyewitnesses said that their neck and head were chopped off.

The security forces recovered one body from middle of the road whereas two bodies were found in the forest areas.A pamphlet recovered from the site showed that the Maoists belonging to the People Liberation Front of India(PLFI) had claimed responsibility of the crime.

In this pamphlet,the PLFI said that they had killed them on the ground that these three villagers were security forces’ ‘informers’.

The CRPF Commandant Kailash Arya informed media persons that there was an ‘encounter’ recently with the Maoists in Budda hill area.