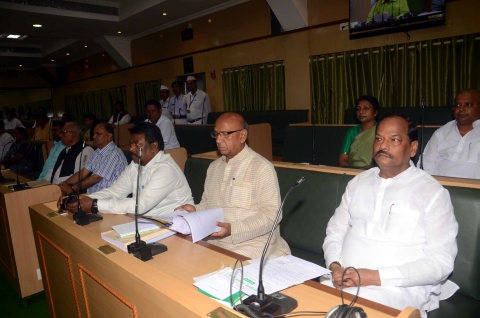 The Six day long monsoon session of the Jharkhand Assembly began on Friday with the Opposition MLAs demanding a CBI probe into the charge of horse trading in the recently concluded Raya Sabha polls won by the ruling BJP in Jharkhand.
However,as per the schedule,Jharkhand Governor Draupadi Murmu,Chief Minister Raghubar Das and Speaker Dinesh Oraon planted trees inside the Assembly complex.This was part of the government’s ongoing green campaign across the country.
Alongside,the Opposition leaders including leader of the Opposition Hemant Soren,the Congress state unit president Sukhdev Bhagat and Jharkhand Vikas Morcha leader Pradeep Yadav stood outside the entry gate of the Assembly posters in protest against the BJP government led by Chief Minister Raghubar Das.
These Opposition MLAs were demanding CBI probe into the video indicating the ‘Horse trading’ in the recently held Rajya Sabha polls won by the BJP candidate and Union Minister Mukhtar Abbas Naqvi and Mahesh Poddar who had defeated JMM candidate Basant Soren.

The victory of Poddar was alleged to be the result of ‘horse trading.’As such the Opposition MLAs banners read: “Raghubar Das Hai Hai” and “Rs 5 crore For Vote Mamle Ki Jaach CBI Se Karaye(Get Rs 5 crore for vote showing video investigated by the CBI).
Also,Soren,ex CM,held a press conference,inside his office room at the Assembly premise and said that if their demand for the CBI inquiry into the case was not accepted by the government,the JMM will launch agitation against it.
However,the session began and was later adjurned till Monday.