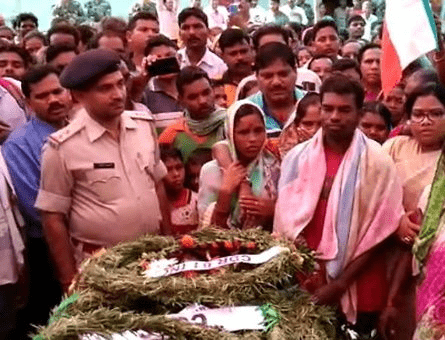 With tears in their eyes, scores of villagers took part in last rites performed on the body of the Martyr Santosh Gop, a BSF jawan. Gop was paid tribute by hundreds of people at Tengra village in Gumla where last rites were performed.

The body of Gop who was killed in firing by Pakistan army in cease firing violation case at the LoC in J&K on Saturday,brought to Ranchi at the Birsa Munda Airport on Monday when and where many senior functionaries including Governor Draupadi Murmu, Speaker of the state Assembly Dinesh Oraon and Member of Parliament Sudarshan Bhagat offered floral tributes to him.