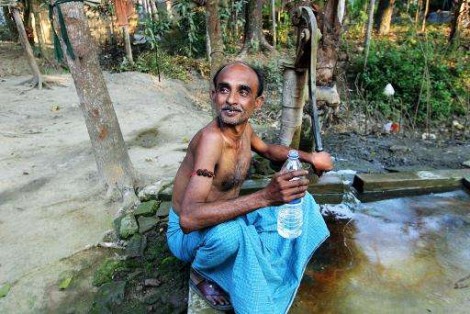 An Indian charity and a French NGO 1001 Fontaines developed a new plant that treats the water in a man made pond in the village of Madusudankati in eastern India.

The villagers suffered illnesses from drinking contaminated ground water for several years. The diseases were blamed on the high arsenic content in the ground water that the villagers pumped from their wells.

The residents are now receiving bottled water at cheap rates from the purifying plant that has been set up in the village. The plant has a capacity of produce 8,000 litres of potable water per day according to the founder of The Indian charity Sulabh International, Bindeshwar Pathak.

“And the water costs 50 paise per litre, which makes it the cheapest purified, bottled water in the world,” Pathak told AFP.

10,000 people are supposedly benefitting from this project.

“The village cooperative has been entrusted to supply the water in 20 litre bottles to households, shops and markets in the area,” Pathak added.