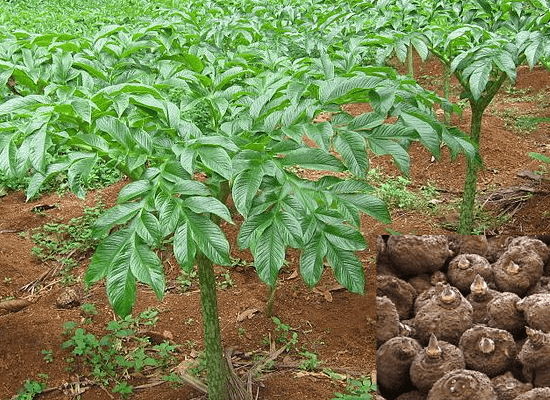 Farmers across Jharkhand have been selling their produce  in wholesale prices, apparently due to bumper crop this season.The produce is Oal, a vegetable grown inside earth  is good for diabetic patients.

In other words,Ooal,known as Elephant Foot Yam,this vegetable looks as elephant’s foot. Elephant foot yam belongs to kingdom Plantae and ‘Araceae’ family. Its binomial name is “Amorphophallus paeoniifolius”. The green shoot part of the plant is also edible.

Most of the vegetables are very attractive and juicy in look.But this Elephant’s foot yam widely grown in tribal belt of Jharkhand is very stony and hard in look. It looks similar to rock. Elephant’s foot yam is meant to prepare in many varieties like; Gravy curries, chutneys, bharta, finger sticks, pickles, French fries etc.

It is also prepared as curries or soups.Yam is suitable for all-age groups. This vegetable is good for diabetic patients. The yellow-pink flesh is highly nutritive and tasty. It has the same size like football and weigh up to 30 lbs.

This veggie is fibrous in nature. In Hindi, Elephant foot yam is called ‘oal’.In Tamil it is called ‘Senai kizhangu’, in Telugu it is known as ‘Pulla ganda’ and ‘Oluo’ in Oriya.

Not only in these states in India, this yam is popular in many countries such as Bangladesh and Sri Lanka.Medically,this yam is suitable for all-age groups. This vegetable is good for diabetic patients as well.The yellow-pink flesh is highly nutritive and tasty. It has the same size like football and weigh up to 30 lbs.

Right now,it is selling at a high rate of Rs 80 a kg in vegetable market in Ranchi.

Haripal Bhagat (48), a elephant foot yam farmer from Huddu village in Lohardaga district, sold three quintals of the vegetable after he was offered to sell the produce at Rs 5000 per quintal.

Bhagat smiles saying that he had spent Rs 20 on transportation and Rs 20 on meals, but the high return on the vegetable was going to help him marry his elder daughter .“I decided to sell the production to avoid transportation and other costs,” he said.

Bhagat is not alone. Farmers of Bhandra, Kero, Kuru and Senha blocks of Lohardaga district and in Ranchi and other parts of the state in Jharkhand,Bihar,Orissa and Chattisgarh have been selling  their ooal-elephant foot yam-and other vegetables including  Chillies,Lady fingers and

French beans at higher cost in this monsoon season of rains.

Huge quantity of these vegetables were seen along Ranchi-Tata highway (NH-33) near Bhuinyadih vegetable market in Ranchi’s Tamar block after having been forced to sell their produce at high rates  because of their high demand.