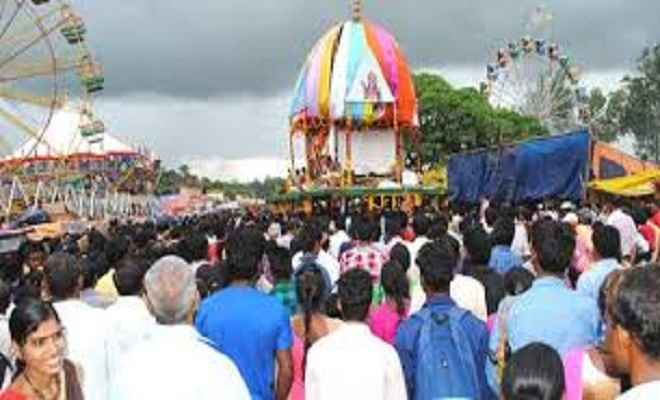 After Puri, it is Dhurwa where hundreds of devotees throng every year to witness the Rath Yatra at the famous Jagannath temple there.

The scene is no different this year at Dhurwa where the Rath Yatra will begin in the afternoon on July 4. As per traditional belief, the first event is connected with 'Snan Yatra', the bathing festival of Lord Jagannath, Goddess Subhadra and Lord Balram.

It is observed on the occasion of Purnima or full moon day of the Hindu month of Jyeshtha. A religious explanation is that after their bathing, they fell ill. Soon, they were taken to a room to recuperate in privacy under the care of the Raj Vaidya (royal doctor).

It is said that with the Ayurvedic medication (pnachan) administered by the Raj Vaidya the Lord recovered in a fortnight and resumed giving an audience to devotees.

The deities returned to the main temple in a procession in the evening and were placed in a place called 'Anasara Pindi'.Subsequently, they fall ill and remain in bed for 15 days.

Closely guarded by priests of the temple, the ceremony was held at the main chamber of the temple, with authorities allowing only a handful of people to witness the ritual.

As per the tradition, the rath yatra will take place on July 4 at the temple and chariot will roll for around 3 km to Lord Jagannath's aunt house (Mausi's Bari).

Meanwhile, the locals are busy celebrating this festival and mn of them will continue to do so till the Ghurti Mela.

"After the holy bath, the gods proceed towards their dark habitation (agyatvas) for 15 days," said Brajbhushan Mishra, head priest of the Dhurwa based Jagannathpur temple. He added that the holy bath has been a historic tradition on Jyeshtha Purnima.

"Each god was bathed with 51 urns (kalash) of water. Devotees also bathed the gods," said the priest.

Before the rath yatra, priests led by Mishra would paint the eyes of the idols at the Netradaan (eye donation) ceremony.