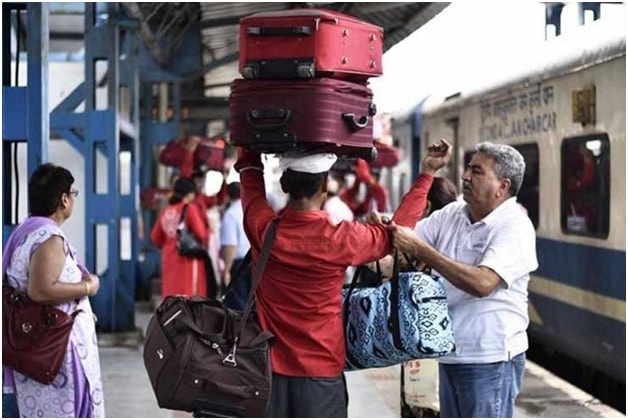 At a time when coolies of the railway stations are on the verge of extinction, memory box carries Amitabh Bacchan from the movie “Coolie”.

Big B was singing,“Saari duniya ka bojh hum uthatey hai”( “we carry the burden of the world”. )

Wearing a red shirt, suitcases on his head and bags on the back, coolie portrays the character of a “Saha yak”, historically known as the porter. Belonging to a class of daily wage workers, he is from among a group of self-employed workers of the Indian Railways. A majority of them hailed from the deprived sections of the society.

RAILWAYS AND THE RED SHIRTS

It has been more than a month now since the Indian government imposed a nationwide lockdown to control the Covid-19 pandemic. This has far-reaching implications for coolies.

With railways put on hold, coolies were quarantined- jobless. " This life we are experiencing for the first time. It's terrible", quips one of them in New Delhi station.

India has the fourth-largest Railway network in the world. It runs around 20000 passenger trains on a daily basis across 7,349 stations in India covering over 67,368 km of route length.

The Indian railways is also one of the largest employers in India, employing around 1.3 million people consisting of the permanent, contractual and licensed labor force. The nature of the job in the last two categories come under informal labor force who have no permanency of job.

Though the government has recently come to the rescue for the contractual labor force by releasing full salaries to 50 thousand laborers. There is nothing for the coolies who work on the license basis.

Most importantly the coolies who comprise of a workforce numbering more than 20000 workers holding a license. Apart from these workers who are license holders, there is an astronomical figure of those workers who exist in between legality and illegality. They too were jobless.

There is no predetermined value or currency earned by them. They rather depend upon the opportunity available at the railway station and earn on a daily basis.

This creates volatility in earning. On days they earn a feasible amount, on some other day they earn less. There are also time when they aren’t able to earn anything. Thus the expectation of savings from this group of people may be quite futile.

This lack of saving makes them fall in risk-prone to any kind of crisis. Prior to the lockdown, this class of workers were facing one more problem. It had a highly diminishing effect on their average earning. The coming in of bags, each consisting of wheels and advent of lifts and escalators in railway stations cut their jobs.

This has provided mechanical ease in carrying the luggage to passengers on their own. However, it resulted in cutting down the demand of manual labor, thus lowering their income.

There also exists a fundamental problem with the nature of their jobs, each requires manual labor for earning daily wages. For manual labor, the capacity to work depends on the physical capacity of the labor.

In other words, this makes them dependent on jobs connected with sectors such as sanitation, hygiene and nutrition, each fetched little income.

Due to the continued low level of income, the working capacity of these workers diminishes,resulting in a further decrease in their income.

As time passes this makes a cobweb situation in their existence. Creating a phenomenon of dual vulnerabilities for them, both economically as well as physically, making it almost impossible for the aging workers to live.

One of the best portrayals of the problems faced by this class of workers can be seen in Mulkraj Anand’s book “Coolie”.

He illustrates various types of exploitation and state injustices faced by this class of coolies. He also puts forward the point that most of these daily wage laborers come from the historically and socially backward section of society.

Though written in the colonial context the idea remains relevant in the present context too. Around 90% of the daily wage laborers come from the historically and socially backward sections of Indian society. This has always heated the debate on a "permanent" existence of a deprived section in the society. Living continuously on the margins, facing immense poverty and hunger.

Everybody knows that there has been a change in name from “coolie” to “sahayak”, by the government stating the prior one as derogatory to this class of workers.

This reminds us of Babasaheb Ambedkar and his rejection of the word “harijan” as proposed by the Mahatma Gandhi. He emphasized on the use of the word “dalit” to recognize the socio, economic and political backwardness of a group of people in order to bring a change.

On this point, it is important to understand the vulnerabilities faced by this class of people, if the state wants to bring a change in their existence.

A mere name change cannot change their social and economic location where they have to fight from tooth to nail in order to exist and cater to the needs of their families. There has been a persistent demand by the coolies turned Saha yaks to make their life more comfortable.

The state has taken various steps like providing restroom facility, free education to their wards, an increase in the number of uniforms and a few others.

What lies unnoticed is the structural problem of fluctuation of wages and the cascading impact it has on their economic life. The state must bring around reforms such as providing health insurance and old age retirement provisions.

Also, the state must recognize that the pandemic has left them crippled. Many of them appear to be stuck in a vicious cycle- loss of job, daily wage and hunger in this challenging time of Coronavirus pandemic.

( Writer is a post-graduate student of Delhi University)