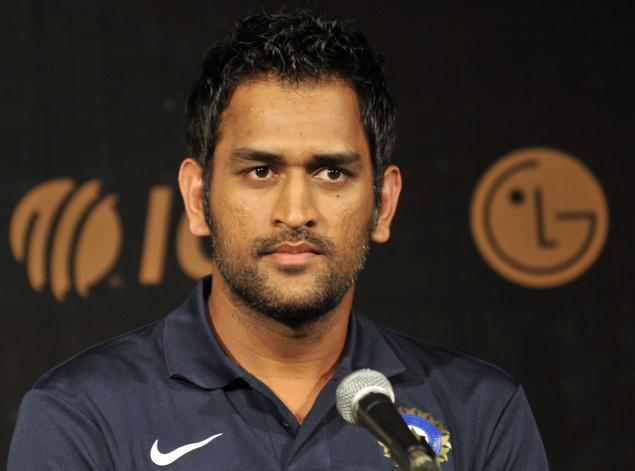 I don’t know.But I know one thing I:it has been rise and rise for the Jharkhand based cricket legend in the making.

Through out the past,Ranchi has been famous for two mental asylums.Now,this picturesque town with salubrious climate has become famous due to the lad who was born on July 7, 1981.

When his parents named him Mahendra Singh Dhoni, they too were ignorant what was in store for the child.This was till 2005 when the world sat up and took notice of the fast emerging wicket keeper-batsman-all-version captain India has ever seen.

Dhoni grew up in Mecon colony in Jharkhand’s capital where his father Paan Singh Dhoni worked with the Metallurgical & Engineering Consultants Limited (India), and often walked to the nearby Mecon Stadium.It turned out to be a blessing in disguise for the young Dhoni, who was able to watch sports persons gathering there for workouts or matches.

Even when his father admitted him to DAV Jawahar Vidya Mandir School at Shyamali Colony, the senior Dhoni never dreamt that his surname would be made famous by his son- Mahi -one day.

As Dhoni moved up the grades in the school, his first taste for sports came when he saw his seniors playing football. And it took no time for the future prodigy to follow his seniors and became a goalkeeper during his school days.

One of the cricket coaches encouraged Dhoni to play cricket. And wicket-keeping came naturally for him as he who seems to have been bestowed with a fine reflex action was adept with goalkeeping.

“He was show passionate with football that we have to drag him forcibly to cricket ground to play for us. We wanted him because he was a utility player—a wicketkeeper who can throw his bat and make good runs for our team,” said one of Dhoni’s childhood friends.

He played for Commando Cricket Club from 1995 to 1998 in Ranchi league before joining Central Coalfields Limited and immediately roped in the company’s team headed by former Bihar Ranji captain Adil Hussein.

Gradually Dhoni became popular for his aerial shots in district cricket league and locals enjoyed occasional sixes from his bat—-the first signs of the small town boy with a cool head and passion for sports set to defy all odds to become the supreme in all versions of cricket.

He played Ranji, Duleep and Deodhar Trophy cricket tournaments from late 1990s and made his ODI debut on 23 December 2004 against Bangladesh and Test debut against Sri Lanka in 2 December 2005.

The world took notice of Dhoni when he hit a scintillating 149 against Pakistan in Visakhapatanam in 2005, and the knock attracted Australian legend Adam Gilchrist, who admitted that that knock forced him to follow the Indian’s career.

“I began following his career around 2005 after that scorching century against Pakistan,” the Australian wicketkeeper-batsman wrote in an Indian magazine.

“MSD (Mahendra Singh Dhoni) always remains calm and this helps him think through a situation. It is this quality that allows him to adapt the situation and change gears quickly.

“It has also helped him in his leadership role since he communicates a sense of being in control, which prevents the rest of his team from panicking….he can be accused of not having copybook technique, but this also turns out to be an advantage because he is unorthodox in his approach to good bowling, something which even the best bowlers find unsettling.”

Former Indian football captain Baichung Bhutia observed; “Many great sports men love more than one sport and Dhoni began his career as a footballer before taking the willow and the leather. And he has a genuine love for football. It is not just kind of show off, but love for football comes from his heart.”

Meticulously cutting a niche in the game while maintaining cordial relations with childhood friends and mentors, Dhoni has a strong individual bent of mind like Ayn Rand’s hero Roark in “The Fountain Head”, believing his own mettle and decisions.

And that has been the reason why Dhoni excelled despite leading the team comprising the likes of former captains Saurav Ganguly, Anil Kumble, Sachin Tendulkar and Rahul Dravid, apparently provoking ex-India speedster Javagal Srinath to observe; “A man of his own beliefs, Dhoni is an intriguing combination of mind and matter. He is successful because of an innate self-confidence and a desire to be himself in an age of cookie-cutter players.”

When Dhoni, who has had a meteoric rise in cricket that enabled him signing unlimited endorsements, reaches home town Ranchi he surprises all and sundry with his silent yet smiling demeanor which his friends don’t get tired of praising and adoring their very own mate.

“He has not changed a bit. The same characteristics spill out when Dhoni talks to us,” recalled one of his childhood friends.

Another friend said; “It was unbelievable when Dhoni walked to economy class in a plane and sitting beside me. When I told my son and parents will be happy to meet him, he said call them to the airport. It was soothing to my eyes when Dhoni touched the feet of my parents at the airport as hundreds around watched Dhoni not forgetting the tradition.”

Dhoni makes it a point to call on his teachers, school chums, former mates of Ranchi league cricket and a few scribes.

But he and his family got upset with a section of journalists in Ranchi for their ‘unfriendly’ and ‘selfish’ attitude.

“A group of TV journalists deliberately stage-managed the attack on Dhoni’s under-construction house after India lost to Bangladesh in a world cup match, and burning his effigy in his very own town,” said Dhoni’s close friend urging not to be quoted. “That upset Dhoni and his parents.”

In fact, Dhoni’s father commented soon after the twin incidents saying; “You people (media) take a player to the skies during good times and pull him down with a thud when the player fails in only one match. Is it proper to burn the effigy of a person?” After all it is only a game?

When Dhoni led India to win the World Cup, both in 50 overs and T20—- the journalists learnt what damage they did to themselves than to the CRICKET LEGEND in the making and his family.

As it is Dhoni never showed arrogance.He maintained calm cool and instead of giving it back,he preferred to perform to silent his critics.

Peter Roebuck summed it up with his memorable observation; “Dhoni is not interested in headlines or heroism, does not play to the gallery. Rather he plays for keeps…It is not arrogance that stirs Dhoni’s aggression, it’s the desire to prevail.”

Even legendary Sunil Gavaskar deplored the mean acts on the Dhonis.But the mainstream media is yet to honour this great son of Jharkhand’s soil.
—————-
(Quotes of cricketers are picked up from INDIA TODAY.
To be continued….