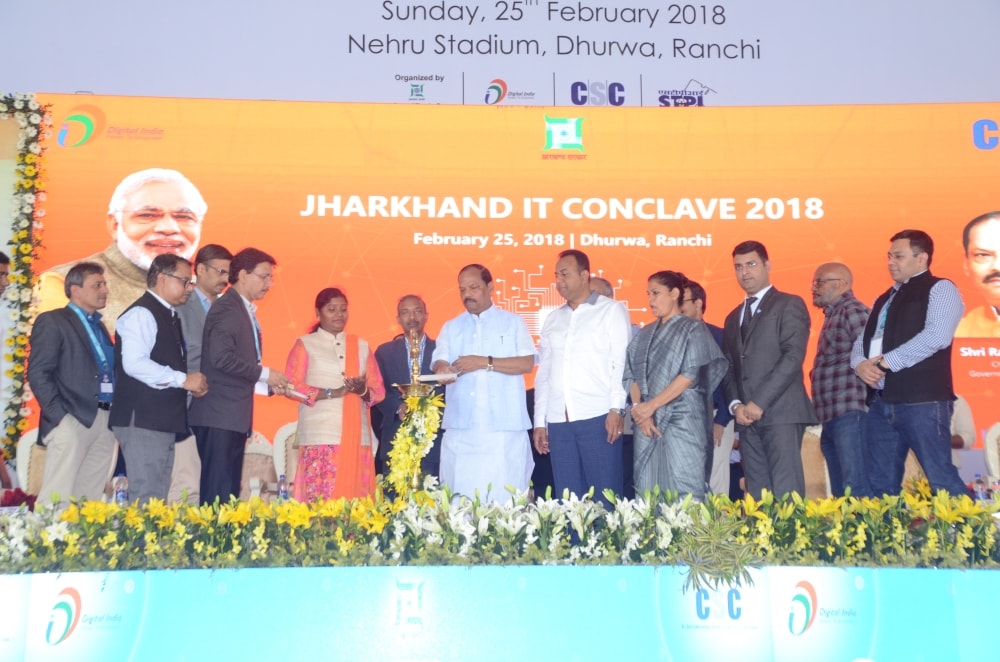 Department of IT & e-Governance, Government of Jharkhand organised Jharkhand IT conclave 2018 on 25th February 2018 at Nehru Stadium. The conclave showcased the successful transformation of IT sector in the State and presented the future opportunities available in this sector. Jharkhand IT Conclave witnessed the presence of Hon’ble Chief Minister Raghubar Das along with other dignitaries from the State and renowned speakers from the country.

The conclave presented successful certification to 4,50,000 rural youths under PMGDISHA program. Taking the IT sector to the next level, the session witnessed the launch of 30 Rural BPOs in Jharkhand along with the inauguration of 2,500+ seater BPO which will create more than 7,500 job opportunities for the youth in the State.  Verified Facebook page for 10,000 VLEs were also launched during the Jharkhand IT Conclave which will help VLEs with Digital Marketing opportunities and facilitating them in their business growth.

During the inaugural session Raghubar Das Hon’ble Chief Minister, Government of Jharkhand graced the occasion and stated that Jharkhand is leading the way in setting up a startup and IT ecosystem in the State. The State Government is dedicated in providing the IT and Startup companies with ready infrastructure embedded with the plug-n-play facility along with program management capabilities.

He further mentioned that Government of Jharkhand is also focused in providing citizen services in a more effective way with the support of Information Technology, and also working consistently to make Hon’ble Prime Minister Narendra Modi’s dream of “Digital India”, turned into reality in the State. He also specified that Jharkhand ranks second in digitally literate programme for rural citizens, both in terms of registration (9.52 lacs citizens have already been registered) and certification numbers (4.70 lacs citizens have been certified). Hon’ble Chief Minister also cited that Rural BPO is one of the prime initiative under Digital India program, and Jharkhand, as a leader, has opened countries first Rural BPO in Silli block of Ranchi. Currently out of 46 Rural BPOs in India, 30 are in Jharkhand and these rural BPOs are run by the VLEs (Village Level Entrepreneur) with at least 10 female employees.

He also apprised that the State has received the investment intention from 7 BPO companies on account of progressive BPO policy, which will help in creation of 7500 new job opportunities in the State. He further quoted that in order to encourage innovative ideas, State has come out with Jharkhand Startup Policy 2016 which will offer Startups with handsome benefits & incentives. The State is also dedicated towards promoting entrepreneurship spirit among the youth and thus committed to establish the startup e-cell in all State’s University.

He further mentioned that Government of Jharkhand is giving main impetus on IT sector to increase transparency in the system and also generating employment in the rural areas of Jharkhand. He also highlighted that the State Government has given smartphones to 73,000 “Sakhi Mandals” to accustom them with Information technology and by March 2019 all the State panchayats will be provided with high speed connectivity through optical fiber. State Naxal effected areas will be facilitated with the Wi-Fi connectivity with the help of BSNL, whereas panchayats in Bokaro and Ramgarh will be able to avail this facility through CSC SPV. Recently, Jharkhand has shown an immense growth in digital transactions. The State has done the business of worth INR 475 crore against the set target of INR 50 crore in current financial year. Chief Minister extended the invitation to IT industries to invest in the State and assured that Government of Jharkhand will provide all possible support to these industries.

Jharkhand IT Conclave 2018 was addressed by Dr. D K Tyagi, CEO of Common Service Center SPV, Omkar Rai, DG-STPI, Anil Chhikara, Chairman-Startup India Foundation, Rahul Narvekar, Founder-The India Network and Rajat Arora, from Facebook India. Industry experts also shared their views to the VLEs and Startups associated with entrepreneurship on how to excel in their venture. The inaugural session was concluded with Vote of thanks given by U P Sah, Director- IT & e-Gov., Government of Jharkhand. More than 7000 VLEs participated in Jharkhand IT Conclave 2018 and till now it was the biggest event organized in the field of IT/ ITeS by the State. With this event it is said that it will speed up the IT and Startup activities in the State.