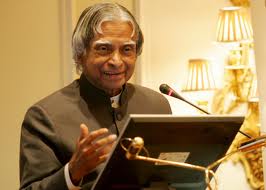 At a time when Parliament is going through a difficult phase over ‘coalgate’, former President A P J Abdul Kalam’s thought provoking book—“Turning Points, A Journey Through Challenges”—-seeks to advice legislators not to take the people for granted and address the issue of corruption decisively.

“Recently, we saw two fasting movements (Anna Hazare and Baba Ramdev’s) against corruption and many more may get inspired. I was asking myself, why are such movements taking place in our democratic country?

“This is basically due to the dilution of standards by Parliament itself. Hence, I would suggest that Parliament has to discuss for a minimum of two weeks the issue of corruption without walk-outs, and evolve a time-bound agenda for eradicating this evil in public life,” he writes in his book.

He cautions; “If people’s representatives fail in their mission, then the people who elected them may express their frustration and dissent in many forms. Each political party has to take stock of what they have done in their own way to prevent or eradicate corruption through Parliament.”

He says that time has come for both Houses of Parliament to deliberate on this issue of corruption and find a time-bound constitutional solution to eliminate this menaces, which includes the recovery of money parked in accounts abroad.

He goes on to write that such timely actions by Parliament will bring confidence among the citizens and promote peace and harmony in the society, which is vital for accelerated development of the nation.

Seeking to awake the Parliamentarians,Dr Kalam quotes Gandhiji: “The real India lies in its villages.It is this vast mass of humanity that can help India make its full contribution to the world.”

Is anybody listening to the missile mans advice?…..