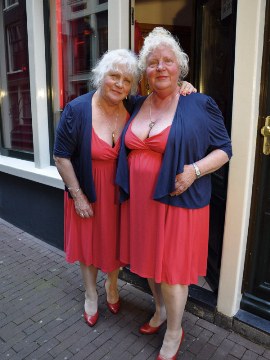 Twins ekk out living by selling sex.Sounds strange,but two Dutch sisters are in the spotlight after they retired from a long inning in prostitution.Both have claimed that they had together entertained 3,55,000 men.

Both have claimed that they took to prostitution due to lack of money.One sister called Louise,who became prostitute at the age of 20,has revealed that after she suffered from arthritis,she withdrew from prostitution two years ago.

Her sister Martine still works as a prostitute two to three times a week.

Though both repent of what they had done,they said their parents never approved of what they did.But gradually they accepted it.Martine is reported having said that she started working at the brothel as a cleaner and two years later joined Louise as a prostitute after many clients mistook her as both being twin sisters looked alike.