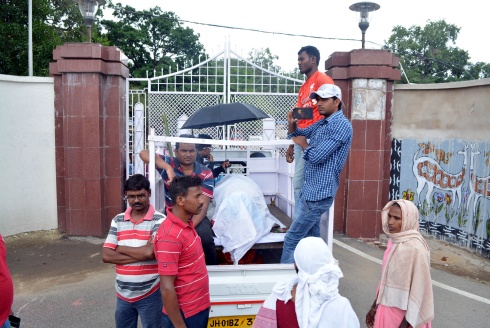 Informing that Kacchap was known to him as his security officer,Munda,in a letter to Chief Minister Raghubar Das on Sunday,said that Kacchap had taken charge of Topchanchi police station on June 13.The same day a truck driver Mohammed Nazir was allegedly shot dead by the police in Rajganj,near Topchanchi in Dhanbad district.

Though Rajganj falls outside jurisdiction of Topchanchi police station,his colleagues had dragged Kacchap’s name in the case of Nazir’s death.This had made Kacchap tense.”He had even rung up his family members and apprised them of his trouble”,writes Munda.

Moreover,there were many evidences –though Kacchap’s legs touched the bedsheet,there was no sign of his legs dragging it;chair lying close to his body; and lack of any sign in his body showing he had hanged himself from the ceiling fan and committed suicide.

Against this backdrop,while police personnel and family members of late Kacchap brought his body and protested outside the official residence of the Chief Minister Raghubar Das in Ranchi,Munda wrote that the case of Kacchap is ‘serious’ and as such,the CM should either set up SIT to inquire into it or get the case investigated by the CBI.