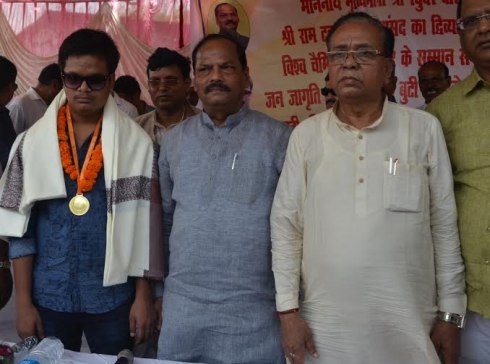 Golu Kumar alias Ohdar is in the news with the state government deciding to honour him by giving him a cash award of Rs one lakh and launch effort to provide him a job.

In Jharkhand,three and two percent jobs were reserved for persons with disability and the sports persons respectively,said Jharkhand Chief Minister Raghubar Das at Booty village in Ranchi on Wednesday when a function was organised to honour Golu.

The CM said that in the current year nearly one lakh people will get jobs.”For this the state government has already declared domicile policy.The common people of this state will benefit from it”,said the CM.

Golu,visually impaired since birth, who had helped Team India of Disabled Cricketers to win the World Cup in South Africa.This young hero had begun playing cricket in Ranchi at the age of eight.

Incidentally,Golu,whose father Rajesh Bihari Lal, lives in his home at Booty,had studied at St. Michael’s School for the Blind.After the CM honoured him,all students o this school for the Blind were in cheers.

“He has proved that disability is not the end of the road for an individual and I am sure this will come as an inspiration for many,” said Lal.

Earlier,Prime Minister Narendra Modi is on record having tweeted about him saying “Watch out for the boy”.

Modi had just finished interacting with the Indian Cricket team that won the Cricket World Cup for the Blind in South Africa.