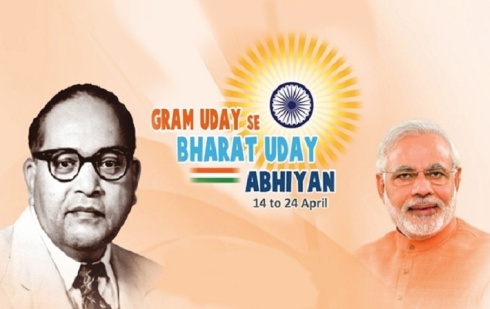 The Prime Minister Narendra Modi today concluded Panchayati Raj Sammelan in Jamshedpur by urging representatives of the Panchahayt to develop their villages across the country.

“Realise the dream of Mahatama Gandhi”,said the PM.

“If the fund meant for development of the rural areas is used properly,a lot of development can take place.To do so,the representatives of Panchayat and the people from village Panchahayt can make it possible”,said the PM.

He appealed to the villagers to ensure that their villages remain clean and said that in case the students do not attend school,the Mukhiya should intervene.This can make the parents alert and thereby usher in change”,said the PM.

Highlighting the high nutritious food needs of pregnant women,the PM urged them to make use of the Sahiyas posted in villages and benefit from them”,said the PM.

“Gram Sabha members should take a vow to end ill literacy,observe establishment function of the function,resolve to unite and work unitedly to get the village developed”,said the PM.

As it is,the UPA shad tarted Panchayati Raj Day celebrations on April 24, 2010.Todaay,Prime Minister Narendra Modi concluded it by making it a historic event and addressed the Panchayati Raj Sammelan in Jamshedpur, Jharkhand where around 3,000 Panchayat representatives from all states of the country were present.

His message at the event, being held at Jamshedpur’s JRD Tata Sports Complex, also streamed live to gram sabhas all over the country.

The PM who greeted all those working to strengthen Panchayati Raj institutions across India, tweeted this morning:
Efficient & effective Panchayati Raj Institutions will give an impetus to rural development & play a vital role in #TransformingIndia.

— Narendra Modi (@narendramodi) April 24, 2016
In the past,Prime Minister Rajiv Gandhi was the driving force behind the devolution of power to panchayats. Finally in 1993, two years after his death, the 73rd Constitutional Amendment came into force institutionalising Panchayati Raj.

So far, National Panchayati Raj Day was celebrated in Delhi, but this year, as part of the ‘Gram Uday Se Bharat Uday Abhiyan’, it was celebrated in all gram panchayats across the country, except those in poll-bound states.