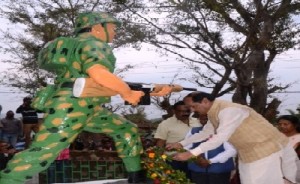 The memorial carrying the soil brought from his graveyard in a village in Agartala where he was buried after he died fighting in the India-Pakistan war (Called Bangladesh Liberation War of 1971)is planned to be implemented by the state government.

As it is,Paramvir Chakra winner was a soldier in the Indian Army.He had died in service in the Battle of Hilli in1971. He was posthumously awarded the Paramvir Chakr,a India’s highest award for valour in the face of the enemy.

Albert Ekka was born on 27 December 1942, in Jari village of Chainpur block in Gumla district in Jharkhand.His father was Julius Ekka and he hailed from a Christian tribal called Oraon family.On 27 December 1962, at the age of 20, Albert was enrolled in the 14 Guards of the Indian army. He married to Balamdine Ekka and his son Bhisent Ekka was just 9 months old, when he sacrificed his life for the country in 1971 Indo-Pak war.