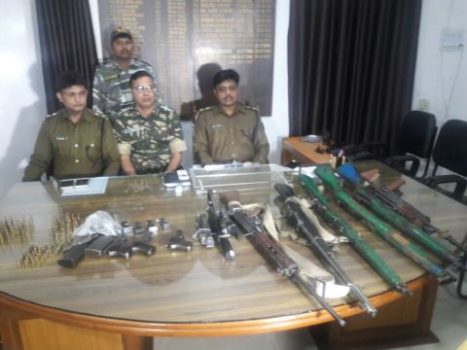 Jharkhand police gained another feather in its cap on Saturday when it seized a huge quantity of arms and ammunitions belonging to the Maoists.

Following interrogations of the veteran Maoist Kanhu Munda who had surrendered before the police on Thursday,the police recovered a huge qquantity of arms and ammunitions from the forest area near Jamshedpur on Saturday.These included one SLR,three 303,one INSAS rifle,three 7.65 Pistol magazine and one 9mm Pistol.

“Many of these weapons were looted by the Maoists from security forces”,said a senior police officer.

Kanhu Munda was the most wanted Maoist.He carried an award of Rs 25 lakh on his head.He was among seven Maoists had surrendered before the police.On the tip off provided by him,the police had raided the forest area and recovered these weapons from the forest in East Singhbhum district of Jharkhand.