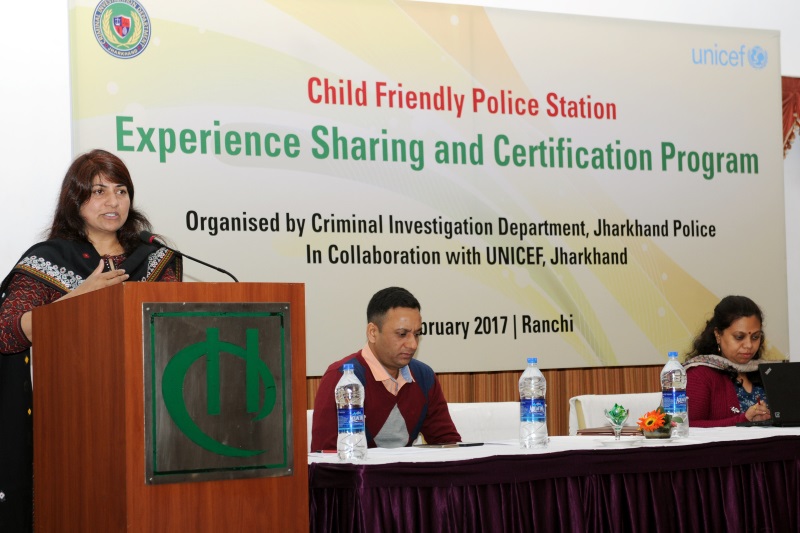 Today, an additional 84 police stations from East Singhbhum, Hazaribag, Saraikela karsawa, Chatra, Pakur, Jamtara, Garwah, Koderma, Gumla, Dumka, Latehar, Lohardaga, Palamu, Rail Dhanbad, Khunti, Bokaro, Ramgarh, Dhanbad, Ranchi have been certified child friendly after a verification process conducted by CID officials.Ms Sampat Meena, IG CID said, “The performance of the police officers at the district level has been exceptional. We will continue this initiative till all police stations in Jharkhand become child friendly. The objective of the CFPS initiative is to sensitize the police officers especially the Child Welfare Police Officer (CFPO) and Officer in Charge (OIC) in the police station. This empowers the police officers to perform their role better and take action in the best interest of children as envisaged under the Juvenile Justice (Care and Protection of Children) Act 2015.”

Dr Madhulika Jonathan, Chief of UNICEF Jharkhand said, “The Juvenile Justice (JJ) Act 2015 has a child friendly component that needs to be implemented urgently. The CFPS initiative is a step in that direction which will ensure a child is received in a child friendly environment and the best interest of the child is top most priority.”

A total of 21 indicators for a CFPS have been jointly developed by CID & UNICEF.These indicators are built around Structure, Procedures, Attitude, Resources, Co-ordination and Community Outreach (SPARCC) by the police. Some of these indicators are - A separate space created for CWPO to interact with children in the police station; name and contact details of the CWPO are displayed prominently in the police station; CWPO is aware of the right procedure to deal with children in need of care and protection and children in conflict with the law; a copy of the FIR is handed over to the victim free of cost; for every CWPO any kind of violence and abuse is unacceptable; while dealing with children in conflict with the law the CWPO will focus on the reason rather than the nature of offence; number of trained CWPOs and police officers; copies of legislations, acts, notifications are available at the police station; CWPO coordinates with the Child Welfare Committee (CWC), Juvenile Justice Board (JJ Board) and paralegal volunteers, hospitals; name and contact details of other child protection functionaries is available with the police station; public meetings and awareness programmes organized on child protection issues by the CWPO for community outreach.

Over 95 CWPOs, Deputy Superintendents of Police in charge of Special Juvenile Police Unit (SJPU) from districts across Jharkhand participated in the program and shared the efforts they had made for successful implementation of the CFPS initiative.