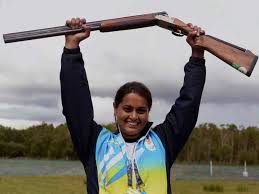 As a shooter, she marched forward by shooting her way to a career-best gold in the women’s double trap final on Wednesday. Her successful performance gave India its second medal of the day, following the bronze won by shooter Om Mitharval in the 50m pistol men’s finals.

This was her most prestigious award at it was gold in the Women's Double Trap event at the Gold Coast Commonwealth Games 2018.She had shot 96 in the finals in Gold Coast, and she beat Australia's Emma Cox two shots to one in the shoot-off.

Based in Delhi,26-year old has a shooting background rooted in the land of Bihar where her father Digvijay Singh lived.Digvijay Singh is a former MP from Bihar, and grandfather Surendra Singh had served as President of the National Rifle Association of India.

In the past, she had won gold in the women's trap event in the National Shooting Championships in 2012.