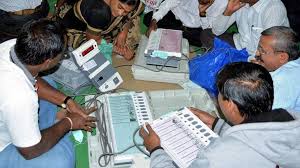 For the first time when the civic body polls are taking place on the party basis, the ruling BJP is contesting it alone.The results of these Municipal Elections held on Monday are going to be a popularity test for the Chief Minister Raghubar Das.

Already the BJP media person Deepak Prakash has said that Das and State BJP Unit President Laxman Gilua had directed dialogues with the party workers in all five State Divisions and discussed measures to strengthen the party in the State.

The BJP is contesting on all 34 seats of Municipal elections.Divisional Party Meetings were held at Dumka in Santhal Pargana, Dhanbad in Hazaribagh, Chaibasa in Kolhan, Khunti in Ranchi and Betla in Palamu on February 21, 22, 23, 27 and 28.Each of these meetings were addressed by Chief Minister Raghubar Das.

The results of these civic body polls will show the popularity of the Das government.Though AJSU was a natural ally of the ruling party, it has put up its own candidates.

Meanwhile, security was tightened across the state to hold the polls.In any case, the results of these municipal elections are going to indicate the mood of citizens connected with the BJP government led by CM Raghubar Das.