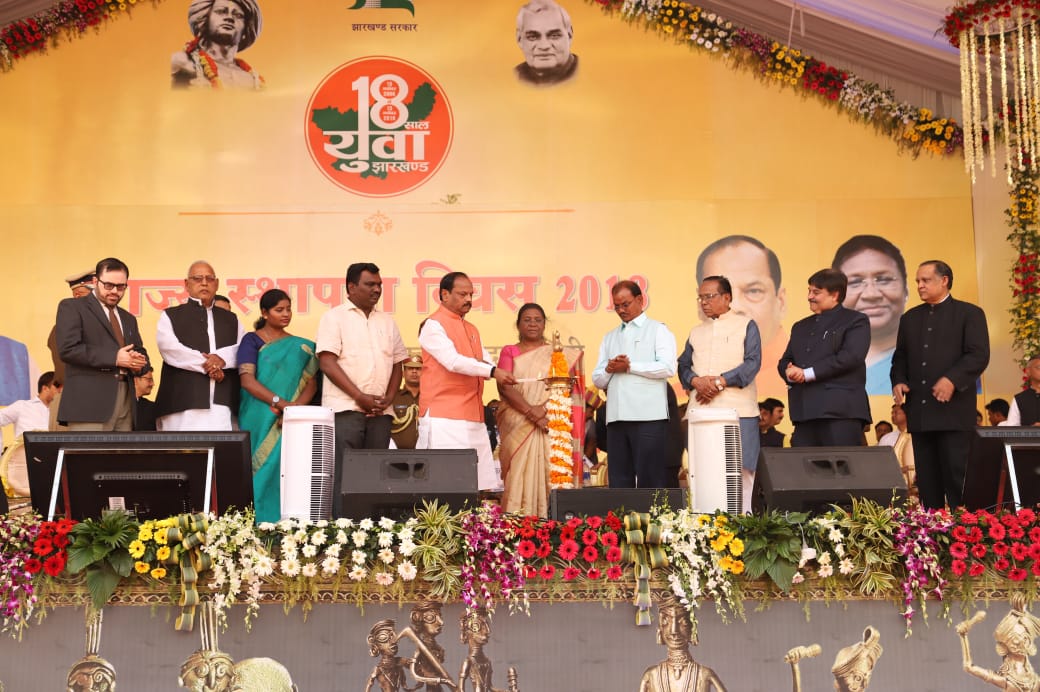 Jharkhand celebrated the 18th year of its establishment amid much fanfare today. With a series of activities lined up ranging from the launch of different Government schemes to a glittering cultural evening, the State entered in its 19th year on Thursday, November 15.

The Statehood Celebration programme which also marks the birth anniversary of one of the greatest tribal leaders - Bhagwan Birsa Munda --commenced from 9 AM onwards. Chief Minister Raghubar Das along with other dignitaries paid floral tribute to Bhagwan Birsa at his mausoleum located at Kokar. Later, the CM visited Birsa Chowk to garland the statuette of martyr Birsa around 9:30 AM.

The arrangement for the main programme was made at Morhabadi Ground. The event was marked by a protest of Para Teachers whose demand of pay hike and regularisation of services was not net. The protest made agitatationists to show black flags to CM Das. Earlier, the foundation day function began from 12:30 PM. As per the tentative programme schedule released by the State government, the CM addressed the State at 1:20 PM followed by the speech of Governor, Draupadi Murmu at 1:40 PM, who graced the occasion as the Chief Guest. Minister of State for Tribal Affairs, Sudarshan Bhagat, Speaker - State Legislative Assembly, Dinesh Oraon including Minister of State for Civil Aviation, Jayant Sinha were. present as the distinguished guests during the programme.

The welcome address was delivered by Minister, Amar Bauri - Department of Sports, Art, Culture and Youths Affairs at 12:43 PM. Distribution of grants amount to the beneficiaries, launch of coffee table book, major announcements about State's achieving Open Defecation Free (ODF) tag including declaring three districts - Lohardaga, Hazaribagh and Deoghar fully electrified were done by the CM, the Governor, the Ministers, MPs and others. Various presentations, audio-video clippings of agriculture department focusing on doubling the income of cultivators were screened there.

To mark the occasion, around 10 persons/ institutions/ Non-Government Organisations (NGOs) were felicitated for their significant contribution towards the society with a citation and incentive rewards.

Sakhi Mandals' aka women Self-Help Groups (SHGs) associated with JSLPS that played a significant role in reviving cottage industries and have been doing a highly commendable job in agro, pisciculture, livestock and animal husbandry to name a few were given a grant amount of Rs. 100 crore.

Loan letters, assets sanctioned under different Central and State government schemes such as Mudra by various banks to the beneficiaries were also distributed. The main event was wrapped up at 1:50 PM with a Band Display presented by Police personnel.

Continuing the celebration ahead, this year too, a tantalizing cultural event was in the form musical maestros. Two popular Bollywood Playback singers - Kavita Krishnamurthy and Suresh Wadkak entertained the public with their heartwarming musical tunes.