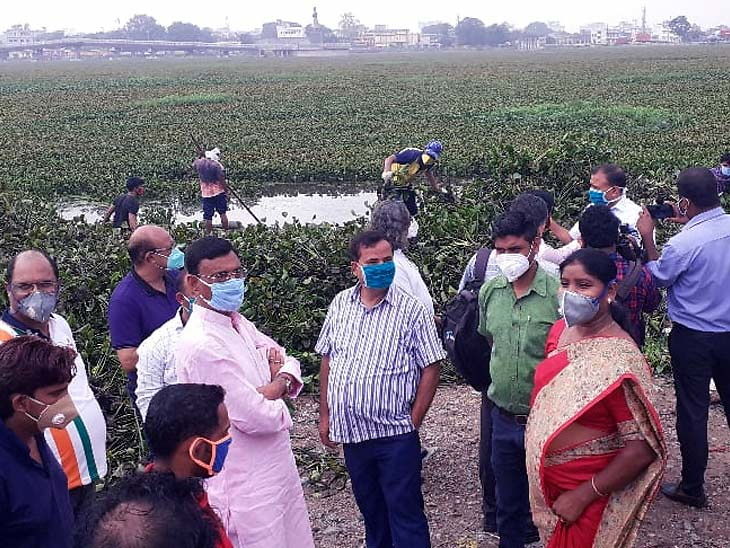 *Seen in this picture are RMC functionaries at Ranchi lake where their staff were busy removing Jalkumbhi from its water.

The state capital's civic body has launched a campaign to free water of the Ranchi Lake(Bada Talab) from the plant hyacinth (Eichhornia crassipes known as Jalkumbhi in Hindi).

The campaign beginning Monday is being carried by a team of 10 Ranchi Municipal Corporation(RMC) staff. It started after www.jharkhandstatenews.com highlighted it in its top story last month.

'We want to remove hyacinth from the lake", said Lakra.In fact, hyacinth was nicknamed as "Terror of Bada Talab" because it grows at an alarming rate and spreads on the surface of the water body.

"Every day jalkumbhi will be removed during the morning times", said Lakra. The RMC officials say that since water is going to fall in the lake during monsoon, the cleanliness drive is urgently required to be activated.

Investigation revealed that the RMC plans to clean water of the lake by using the Remediation Technologies screening matrix. It is considered a user-friendly tool to screen for technologies for remediation."Variables used in screening include contaminants, development status, cost and clean up time", states epa.gov.

City Commissioner Manoj Kumar who was present at the site-directed RMC staff to ensure that garbage was not thrown into the lake and cars, buses and trucks not washed on the bank of the lake.