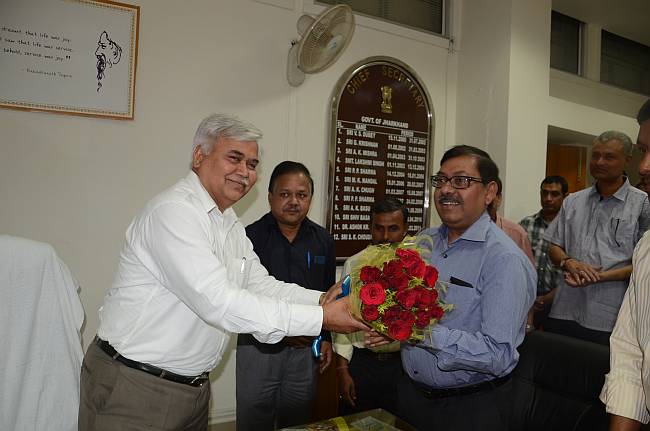 The year was 2009.Ram Sevak Sharma,then Principal Secretary of the Information Technology Department of the Jharkhand government who was appointed as the first Director General of the Nandan Nilekani led Unique Identification Authority of India ,proceeded on deputation to steer it and implement the UPA II’s ambitious Aadhar poject from New Delhi.Four years later,as DG of UIDAI,he is tipped to be Jharkhand’s next Chief Secretary.

In fact,if not a bureaucrat,Sharma,an IAS officer of 1978 batch, may have become a mathematician of repute.For that is what he studied,completing Masters in Mathematics from IIT, Kanpur and Computer Science from the University of California.

His seniors from the Indian Administrative Service remember him as a “methodical,responsible and respectful.But,they say,he never showed any inclination for a post.”He excelled in every post he was assigned by the government as he has the  knack to build a team and lead it from the front”,says BK Sinha,a 1975 batch IAS,who is a Member of Central Administrative Tribunal.

Sharma’s batchmate Devashish Gupta,vice chairman of State Planning Board,adds:”He is affable,well-disciplined,and an asset as a bureaucrat who is the master of team work.”

Santosh Kumar Satapathy,Principal Secretary,Water Resources and Rural Works Department,says:”He may have his own thoughts,but he honours view points of others.This instantly makes him the leader.”

NN Sinha,Principal Secretary to Governor,who was a probationer of Sharma,says:”He does not beat around the bush.He is a very hard working officer and a hard task mater as well.”

After joining the IAS of the Bihar(Later Jharkhand)cadre,Sharma has served as Deputy Development Commissioner in Saharsa, District Collector in Begusarai, Purnea and Dhanbad, Joint Secretary in the Department of Economic Affairs of the Ministry of Finance and Nodal Officer for the IMF, MIGA and GEF.

Nilekani had picked him for the UIDAI.While he worked for the UIDAI,laid its infrastructure and launched the Aadhar project across the country,Sharma was promoted and empaneled as Secretary of the government of India.Before the President’s Rule was imposed in this state for the third time on January 18,the then chief minister Arjun Munda asked him to return to Jharkhand as chief secretary.

After the President’s Rule was notified,the administration headed by Governor Syed Ahmad sought his services.But Union Telecommunication Minister Kapil Sibal,who was aware of Sharma’s credentials,wanted him to become Secretary of his Ministry.

This is a creamy post.So because the post of Secretary of the Government of India provides an opportunity to govern the department across the country and as such is described as as every IAS officer’s dream job.Sharma was fortunate to have been offered this post.

Also it was advantageous for Sharma for another reason .Delhi was close to the village in Utter Pradesh where he was born and brought up.But this was not acceptable to Union Rural Development Minister Jai Ram Ramesh,who has strong feeling for Jharkhand,its people and their development. .“I told the(Union) Cabinet Secretary that come what it may,Sharmaji has to be in Jharkhand as CS”,says Jairam Ramesh.

Yet,Sharma had the option.Inorder to get the plum post of Secretary,Telecommunication,Government of India,he could have rejected the offer to return to Jharkhand,far away from his UP village,as CS.But he sacrificed his personal interests and preferred to accept the post of the CS.

This was not for nothing.His past records show Sharma loves to take up challenges.Which is why after he did his Masters and returned from California in 2003,he was in Jharkhand for six years.During this period,he was transferred nine times.

But he kept frustration out and as Secretary (IT) — a post he held for over three years in two stints — he created the infrastructure for e-governance in the state, complete with programmes for public grievances, treasury and transport. Today, JharNet is a success story, attaining a national e-governance ranking in 2007-08.

After the state was placed under President’s rule for the second time,the state government turned to Sharma, seeking advice for an action plan. In a report titled ‘Governance reforms in next 100 days’ — he submitted it to the government on June 13,2008 — Sharma suggested a slew of measures.

These include payment gateway agreements with commercial banks to accept online payments of taxes, digitisation of land revenue and mutation records, information for ST/SC/BC students, release of scholarship money online and development of a software to register public grievances and address them within a timeframe.

Now,when he is set to join Jharkhand as CS on April 1,Sharma is happy.”Jindagi Me Khushi Apne Karm Se Hi Milti Hai.Dekhte Hain Ham Kaya kar Sakte Hai”,he says hiding a a strong sense of  fear in his heart –What if the President’s rule is lifted and he is thrown out as chief secretary.

But since all of them are committed to the cause of development of Jharkhand,none of them is expected to turn rogue and let Sharma’s fear come true till he retires as CS of Jharkhand in 2015.

R.S.Sharma was born on 1st October, 1955 in a small village in Agra District of Uttar Pradesh. After his early education in Firozabad, he graduated from University of Allahabad in 1974. He did his Masters in Mathematics from IIT, Kanpur in 1976.

He joined Indian Administrative Service in 1978 and was allocated to the Bihar cadre. In Bihar, he worked in various positions from 1980 till 1995. These postings include Dy Development Commissioner in Saharsa, and DM/DC in Begusarai, Purnea and Dhanbad. He also worked as Joint Secretary, Irrigation, State Transport Commissioner and Director, Treasury and Provident Fund in Bihar.

In 1995, he went on deputation to Government of India and worked there in the Department of Economic Affairs of the Ministry of Finance  as Joint Secretary. In GOI he was looking after the functions covering the areas of policy of financing of infrastructure and funding and policy issues related to World Bank and  Asian Development Bank. He was Government of India’s Nodal Officer for IMF, MIGA and GEF. He was associated with negotiations with bilateral and multilateral agencies  for project funding.

Sharma has been deeply involved in the administrative reforms area, in Information and Communication Technology (ICT) and its application to simplify the administrative processes. He has been advocating use of information IT tools for improving Governance since 80’s. He has been credited with the development of software programs for Public Grievances, Treasuries, Transport and other areas. His services have been recognized at various forums. He has been directly involved in a number of e-Governance initiatives for the State Government, which has put Jharkhand at a significantly high position in the national e-Governance ranking.

*Sharma is the recepient of DATAQUEST e-GovernanceChampion 2006 (East) Award

*The Award was in recognition of his initiatives for harnessing the power of Information Technology at various levels – from District to State and Central Government since 1986 – and leading Jharkhand’s ICT Initiatives through apt policy framework and strategies for the benefit of the masses.

Details of his professional career

Director General UIDAI from 2009 till date

To facilitate the Governor in discharging of his constituent and other duties.