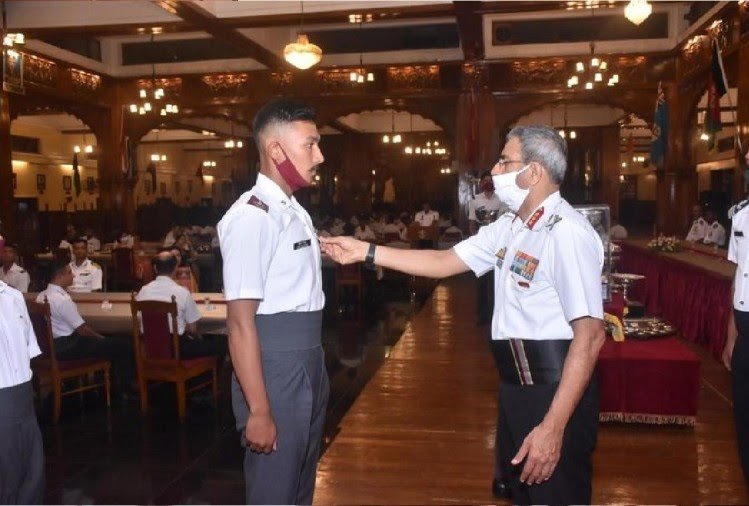 Winners are Lt Umer Fayaz, Rajputana Rifles Regiment, Trophy and Silver Medal for displaying overall improvement in performance during the training at NDA Instituted in NDA.

Lieutenant Ummer Fayaz was born at Sursunu village in Kulgam district of Jammu & Kashmir. He studied from Jawahar Navodaya Vidalaya, Anantnag and joined the 129th course of NDA to pursue his dream of becoming an Army officer.

During his training at NDA, he demonstrated outstanding improvement in his performance in all disciplines.

Lieutenant Ummer Fayaz was commissioned on 10 December 2016 into 2 Rajputana Rifles of the famed Rajputana Rifles Regiment and was deployed in Akhnoor Sector of Jammu & Kashmir. In early May 2017, while on leave at his native place, in an unfortunate and dastardly act, the terrorists kidnapped and later brutally killed him.

The life and supreme sacrifice of Lieutenant Ummer Fayaz is indeed an inspiration for today’s youth especially from rural areas in the valley for joining the Indian Armed Forces.

In the memory of Late Lieutenant Ummar Fayaz, Commandant’s Motivation Award, Sponsored by the Rajputana Rifles Regiment for displaying Overall Improvement in Performance has been instituted from this year onwards.

The winner of first Commandant’s Motivation Award – Lieutenant Ummer Fayaz, Rajputana Rifles Regiment Trophy and Silver Medal for displaying Overall Improvement in Performance has been awarded to Cadet Vijay Bahadur of 139 NDA Course on 07 Nov 20 in the end of Term ceremony at NDA Khadakwasla near Pune.