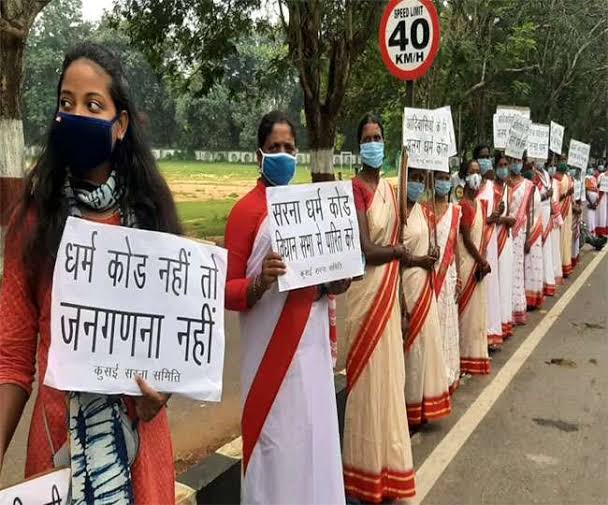 A mega Adivasi agitation to press the Centre to fulfill their demand to recognise and register a separate religion of Adivasis.They call it Sarna Dharm.

Billed as Adivasi Sengel Abhiyan(ASA),the movement was kicked off today at Kherchatar village under Kasmar block of Bokaro district in Jharkhand where a public meeting was held and addressed by the leader of the movement Salkhand Murmu who is ex BJP MP..

The move,which is apparently backed by the ruling JMM,Congress,RJD and Left organisations,has its own background.The Adivasis across the country was primarily divided into communities of Christians and Hindus for centuries.Now,however,a middle and high middle class members of Adivasis who worship trees,clouds,stars and the God Shiva,claim they were not part of any of these religions and argue that they had their own system of belief and practices connected with nature.They call it Sarna dharm.

By the near 2020,JMM led coalition government headed by Chief Minister Hemant Soren had convened a special session of the Jharkhand Assembly and succeeded in getting a resolution on Sarna Dharm code  passed unanimously.The resolution was sent to the Union government for acceptance of Sarna Dharm Code in the Constitution of India.

At a time,when Assembly polls are slated to be held in West Bengal soon,the move may have its electoral implications as Adivasis constitute a minority community there.

In any case,the threat of agitation to cause traffic jams on road-train tracks in these states can not be taken lightly,especially in minerally rich Jharkhand where the ruling coalition parties comprising JMM,Congress and RJD appear to be supporting the agitation.      .