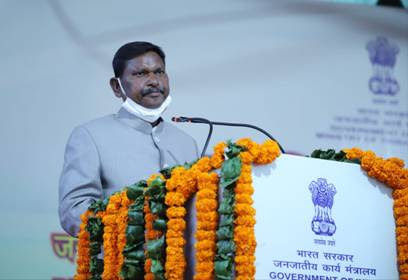 The Ministry invites Tribal Artists residing in different States and Union Territories every year to  the National Capital as Guests on the Republic Day.

Minister of State for Steel and Mines Shri Faggan Singh Kulaste, former Union Tribal Affairs Minister Shri Jua Oraon and many Members of Parliament and many dignitaries were present to witness the cultural performances of Tribal artists.

Addressing the  audience on the occasion, Shri Arjun Munda said that the tribals are the pride of the nation. The Constitutional values and provisions ensure that the tribals with their cultural richness, closeness to and understanding of  nature, simplistic and unique  way of life and democratic traditions are able to progress and develop , the Minister said.

Sh Arjun Munda said that the richness of tribals is evident from the fact that each tribal community has its own culture, traditions, dance and music. They tribals inhabit and contribute to 40% of the geographical area of the country. He further reiterated that the tribals should be developed in their natural environment and in a way that they contribute to nation building.

This is the vision of our Prime Minister too, the Minister said. It is because of this reason that the Van Dhan Kendras are being set up in tribal states to enable the tribals to generate livelihoods from the minor forest produce and enhance their earnings by value addition to and marketing of their unique products.

Speaking about the empowerment of the tribals, the Minister said that the republic Day festival is not only to showcase the richness of tribal culture but also to highlight the constitutional provisions and laws which empower the tribals as well as give protection to the natural resources like forests. It is the duty of each state to ensure that the tribal population is made aware of their rights and duties, Shri Arjun Munda explained.

Appreciating the rich performances of the tribal artists, Smt Renuka Singh Saruta that the tribals across the country should work together towards Sabka Sath Sabka Vikas and must promote Vocal for Local.

Today’s program comprised of traditional cultural performances by Tableau  artists from the States of Arunachal Pradesh, Chhatisgarh, Gujarat, Maharashtra, Sikkim, Uttarakhand and Ladakh. Tribal songs and dance performances by specially invited artists from Jharkhand was a special attraction this evening. The audience stood enthralled by the various performances on display.