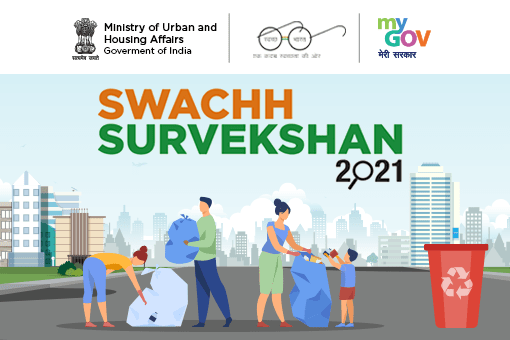 Delhi:Durga Shanker Mishra, Secretary, Ministry of Housing and Housing Affairs (MoHUA) launched the field assessment of Swachh Survekshan (SS) 2021, the sixth edition of the annual cleanliness survey conducted by the Government of India, at a web event in New Delhi today.

SS was introduced by MoHUA in 2016 as a competitive framework to encourage cities to improve the status of urban sanitation while encouraging large scale citizen participation.

Cities have been regularly filling in their data, updating their progress in the MIS along with running several citizen centric campaigns in preparation of SS 2021. Today, we are happy to formally kick off the survey as more than 2,000 assessors get ready to go on the field to assess the performance of cities”.

Every year, the on-field assessments for SS takes place between January 4-31. However, the same had been delayed by two months due to the COVID pandemic and will now be conducted between 1-28 March 2021. The Swachh Survekshan framework is redesigned innovatively every year, to ensure that the process becomes more robust. Keeping in mind the Ministry’s efforts towards ensuring sustainability of the sanitation value chain, the SS 2021 indicators focus on parameters pertaining to wastewater treatment and reuse along with faecal sludge. Similarly, the crucial issues of legacy waste management and remediation of landfills have also been brought to the fore in this edition of Survekshan.

Shri Mishra also touched upon how SS has become a tool for citizen engagement in the spirit of a true ‘Jan Andolan’. Elaborating on the same, Shri Mishra said, “I am happy to share that the SS 2021 has already garnered over 3 crore citizen feedback through a variety of platforms such as the Vote for Your City App, Swachhata App and Swachh Survekshan portal, amongst others”. The Ministry further announced that apart from ranking cities and States, this year, SS would also be ranking districts (basis the performance of their cities).

Since its launch in 2014, Swachh Bharat Mission-Urban (SBM-U) has made significant progress in the area of both sanitation and solid waste management. 4360 Urban ULBs have been declared ODF, 2158 cities certified ODF+ and 551 cities certified ODF++. Moreover, 66 lakhs individual household toilets and over 6 lakhs community/ public toilets have been constructed/ or are under construction. Additionally, nearly 60,000 toilets across 2900+ cities have been made live on Google Maps. In the area of solid waste management, 97% of wards have 100% door-to door collection while 68% of the total waste generated is being processed. A total of six cities have been certified as 5 Star, 86 as 3 star and 65 as 1 star under the Star Rating Protocol for Garbage Free Cities.

The second phase of SBM-U for a period of 5 years (2021-26) has recently been announced in the union budget of 2021. The next phase of the Mission will focus extensively on aspects of sustainable sanitation including fecal sludge and wastewater management, along with holistic solid waste management with a focus on curbing and ultimately eliminating the use of single-use plastic (SUP), reducing air pollution through effective management of construction & demolition waste, and reducing soil pollution through remediation of legacy dumpsites.