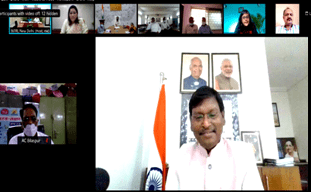 Call it “Training of Trainers” Programme on Forest Rights Act, 2006. This is for the first time virtual training for trainers is being officially organized jointly by the Ministry of Tribal Affairs, National Tribal Research Institute, New Delhi,  Tribal Research and Training Institute Chhattisgarh and  UNDP.

This virtual programme beginning from August 2 is slated to end on August 4. As it is, the Forest Rights Act is important legislation to ensure the realization of tribals’ rights.

Its effective implementation requires extensive training and capacity building of different stakeholders. The tribal communities and their representatives, officials and nodal agencies have to understand their rights. Toward this end training of local communities is possible only when master trainers and resource persons are available at block and district levels.

Addressing the virtual event, Shri. Munda said that “we are looking at all-round development of the tribals as part of the celebration of 'Azadi Ka Amrit Mahotsav' and several programmes are being launched as we approach 75 years of India’s Independence. “