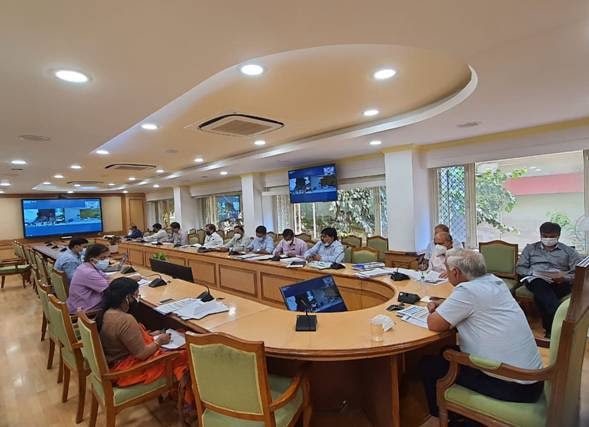 At the 55th meeting of the Central Sanctioning and Monitoring Committee (CSMC) under Pradhan Mantri Awas Yojana-Urban (PMAY-U) on Monday, proposals for the construction of 16,488 houses have been approved. A total of four States/UTs attended the meeting held today in New Delhi through video conference. The houses are proposed to be constructed under Beneficiary-Led Construction (BLC) and Affordable Housing in Partnership (AHP) verticals of PMAY-U.

Presiding over the meeting, Shri Durga Shanker Mishra, Secretary, MoHUA while chairing the meeting said, “The demand for sanction has saturated in all States/UTs and work should be done expeditiously towards completing all the projects within a stipulated time.”

The construction of PMAY-U houses is in various stages. With this, the total number of sanctioned houses under PMAY-U is now 113.06 Lakh; of which 85.65 Lakh have been grounded for construction and more than 51 Lakh have been completed and delivered to the beneficiaries. The total investment under the Mission is ₹ 7.39 Lakh Crore with a Central Assistance of ₹1.82 Lakh Crore. So far, ₹1,06,390 Crore of funds have already been released under the Mission.

The approval for proposals under Model-2 of Affordable Rental Housing Complexes (ARHCs) was also reviewed by Secretary, MoHUA, with 5 States, namely Tamil Nadu, Chhattisgarh, Assam, Uttar Pradesh and Gujarat. A total of 59,350 units, including single bedroom/double bedroom units and dormitory beds, have been approved for urban migrants/ poor, involving a Technology Innovation Grant (TIG) of over ₹ 135 Crore.

ARHCs, a sub-scheme under PMAY-U, provides ease of living to urban migrants/poor in the industrial sector as well as in non-formal urban economy to get access to dignified affordable rental housing close to their workplace. The scheme offers major step towards making of ‘AatmaNirbhar Bharat’.

Further, Secretary, MoHUA, urged the States/ UTs to participate enthusiastically in ‘PMAY(U) Awards -100 Days Challenge’. “Our major focus should be how can States/ UTs make their cities saturated. Completion of projects should be aimed at,” he added.

With respect to Light House Projects (LHPs), Secretary, MoHUA, said that the States/ UTs should encourage registration of stakeholders as Technograhis in large numbers so that they get to learn about globally innovative technologies and adapt their use in Indian context across the nation.