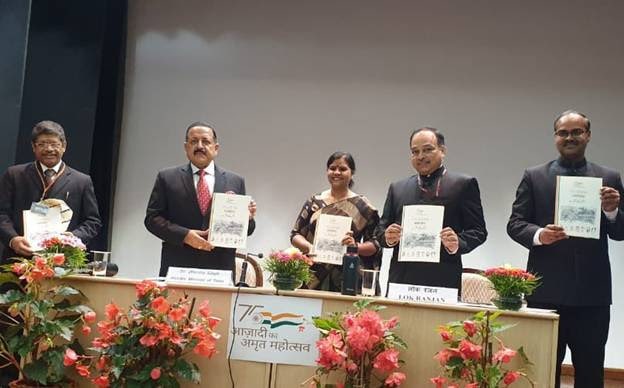 Delivering keynote address at the academy on “India@75: The Road Ahead” today, the Minister said that the next 25 years are very crucial for India and the civil servants have a pivotal role to play in the country’s development journey and they can also be proud to be witnessing the same.

Dr. Jitendra Singh said that the functioning mode of the civil servants should shift from ‘Rule to Role’. Quoting a slogan given by Prime Minister Narendra Modi, the Minister said that “development must become a Jan Andolan using Science & Technology in its most upgraded form”.

The Minister also mentioned in detail the three-month mentorship courses after the academy stint and its benefits for the civil servants.

Dr. Jitendra Singh reiterated that India will become a frontline nation in the world community with having achieved all its targets with optimum utilization of the resources and talent available at hand.

The minister said that for a nation, 75 years is really young and with a younger age population, India is one of the youngest nations around and we have a long, long way to go.

He emphasized that every Indian must benefit from development, have better access to service delivery without red tapism and ease of living and this vision of rapid growth with inclusion, places a huge onerous responsibility on the shoulders of civil servants. The Minister pointed out that the civil servants, as key policymakers, must incorporate the principles underlying welfare and inclusion in both, public policy design and implementation.

The Minister said that the idea behind “Mission Karmayogi”, launched by Prime Minister Shri Narendra Modi, is to harness the potential of digital, face to face and blended learning and further democratize the space for learning and knowledge sharing, capacity building for all those in public service across hierarchies and boundaries.

He exuded confidence that this would be a game-changer in enhancing the competence and service delivery potential of our mammoth bureaucracy. The Minister said that those in public service have to rekindle their sense of duty with a renewed passion and rigor and our commitment to alleviate the living conditions of the poor, the vulnerable and the excluded must supersede all considerations. The Civil services has to ensure that they follow a constructive, progressive and inclusive policy for those they seek to impact upon.

Talking about the administrative reforms undertaken by the Modi government, the Minister mentioned doing away with attestation requirements by a Gazetted officer and also need for an interview for recruitment to the Group ‘C’ and ‘D’ posts.