The Union Minister of Tribal Affairs Shri Arjun Munda has said, “The government is taking up ambitious transformational programmes which will prove to be game-changer for the tribal livelihoods in times to come”. Shri Arjun Munda was speaking at the onboarding of two major initiatives for boosting tribal livelihoods, one with signing of MoU between TRIFED and Big Basket and the other of MoU between TRIFED and PurtyAgrotech of Jharkhand in New Delhi today.

Addressing on the occasion, the Minister added that as we celebrate Azadi Ka Amrit Mahotsav, it is the vision of the Prime Minister that we reach out to the person at the last mile and works towards establishing an Atmanirbhar Bharat. He further remarked that it is in this spirit that the Ministry of Tribal Affairs and TRIFED are working on a war footing to bring about social and economic empowerment of tribal people through a large number of such initiatives. 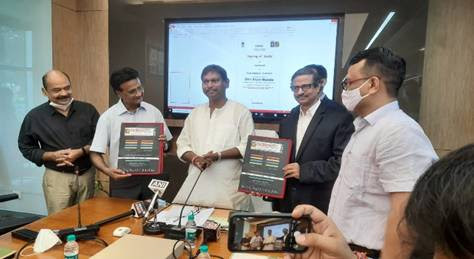 The Union Minister explained that the Tribal artisans, tribal producers, their products and livelihood programmes are the focus of the Prime Minister. He further elaborated that now the tribal products are being brought into the market through value addition and ensuring outstanding quality with the help of research and design through TRIFED and various initiatives of M/o Tribal Affairs. The tribal people have hidden talents and a great potential for making excellent products and they believe in “Mera Van - MeraDhan - MeraUdhyam”. As a nation, it is our duty to ensure that their skills, arts and crafts are not lost for posterity, therefore these programmes have been launched today to benefit the tribals countrywide, the Minister added.

Speaking at the occasion Shri Pravir Krishna, Managing Director, TRIFED said that TRIFED is working day and night to find new and better marketing opportunities both domestically and internationally for the unique tribal products and Minor forest produce. He further added that these two new initiatives will become operational from 2nd October this year and will give a new thrust to tribal livelihoods.

TRIFED is continuing to forge partnerships with different organisations to create synergies together, as a part of its ongoing efforts to improve the lives and livelihoods of the tribals and tribal empowerment. In this context, TRIFED has tied up with Big Basket, an established E-grocery platform that will also work for the promotion and sale of the natural Van Dhan products being made available to them from VAN DHAN production units. 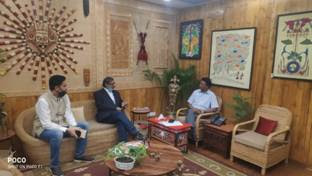 TRIFED and Big Baskethave entered into a Memorandum of Understanding on 20 September, 2021. The MoU was exchanged between Sh.Seshu Kumar,Chief Merchandising Officer(CMO), BIG BASKET and Shri Pravir Krishna, Managing Director, TRIFED in the presence of Shri Arjun Munda, Minister for Tribal Affairs and senior officials of both organisations. TRIFED by converging with Big Basket can leverage their infrastructure, expertise and reach in order to make the Organics, Naturals and TRIFOOD Van Dhan products available to a wider clientele across the country. It will also enable Big Basket to enrich its portfolio by the inclusion of hand-made authentic forest products sourced by the tribal population. This collaboration will also promote Big Basket’s social cause by means of promoting tribal entrepreneurship and generating livelihood opportunities for the tribals.

E-grocery has been one of the fastest-growing segments in the consumer e-commerce space and its growth is propelled by India’s rising consumption and digital penetration. The current pandemic has further accelerated its adoption as consumers seek the convenience of ordering quality groceries delivered safely at home.BigBasket was founded in 2011 in Bangalore and has expanded its presence to 25+ cities across India since then. In the e-grocery space, BigBasket provides one of the largest assortments (and provides customers the convenience of home deliveries on preferred dates and time slots). This partnership will give a great opportunity to modern-day consumers who are more aware and particular about their health and lifestyle needs. Healthier alternatives like The potential product categories can be Van Dhan Naturals, Food grains, Oils, Bakery, Beverages, Snacks, Cleaning and Household, Beauty & Hygiene, Gourmet, etc.

Customers can look forward to the multiple offerings through an exclusive range of the TRIFED – TRIBES INDIA - VAN DHAN on BigBasket.com.

As India moves ahead with its strategy for India@75 and focuses on converting development into a mass movement, TRIFED is working with its roots in ground realities and emphasizing the welfare both in design and implementation. With the focus on “Vocal for Local” and building an “Atmanirbhar Bharat”, TRIFED is undertaking several path breaking activities, while re-dedicating its efforts towards tribal empowerment. 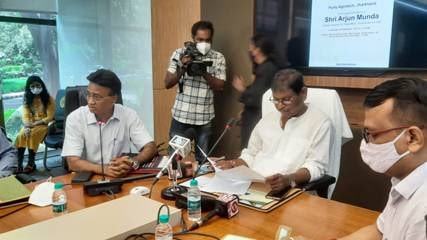 Another such collaboration in this direction has been done with M/s PurtyAgrotech of Jharkhand. TRIFED has also entered into a MoU with ShriBuddhan Singh Purtyof PurtyAgrotech. ShriBuddhan Singh Purty, an origin of “Ho tribe” from East Singhbhum district, Jharkhand is a tribal entrepreneur who has a unique business for developing pearl cultivation. In order to promote the art of growing pearls among other tribal entrepreneurs and tap the potential of this market,TRIFED plans to create a market for this unique craft and at the same time assisting ShriBuddhan Singh Purtyof PurtyAgrotech in developing a more professional and business-oriented enterprise with this collaboration.The two organizations have partnered to work jointly towards the overall upliftment of the tribal community in the following areas:

MoU Signing between TRIFED and PurtyAgrotech

i.)         TRIFED will empanel PurtyAgrotechas supplier to TRIBES INDIA and procure pearls which shall be sold through the network of 141 Tribes India outlets and various eCommerce platforms.

ii.)        Under the tech for tribal initiatives, ShriBuddhan Singh Purtywill be developed as a Master Trainer and transfer of technology and techniques in the form of knowledge sharing with more tribal SHGs in order to promote aquaculture in self-reliant tribal entrepreneurs.

iv.)       VDVK Clusters engaged in pisciculture where the pond is available can be used for oyster breeding which can be taken up simultaneously as an additional business activity.

v.)        Besides, it is planned to develop 25 VDVKCs in Jharkhand where such aquaculture business for pearl farming activities can be carried out.

The breeding of oysters and the development of pearls is a sustainable business and can easily be emulated by those tribal gatherers who have access to a nearby waterbody.TRIFED plans to handhold those VDVK Clusters involved in pisciculture by initially identifying them and help them further develop oyster breeding in it.

With the successful implementation of these collaborations, TRIFED hopes to empower the tribal beneficiaries by developing their skills and help in generating income and livelihoods. Through such and other activities, TRIFED is working towards a complete transformation of tribal lives and livelihoods across the country.